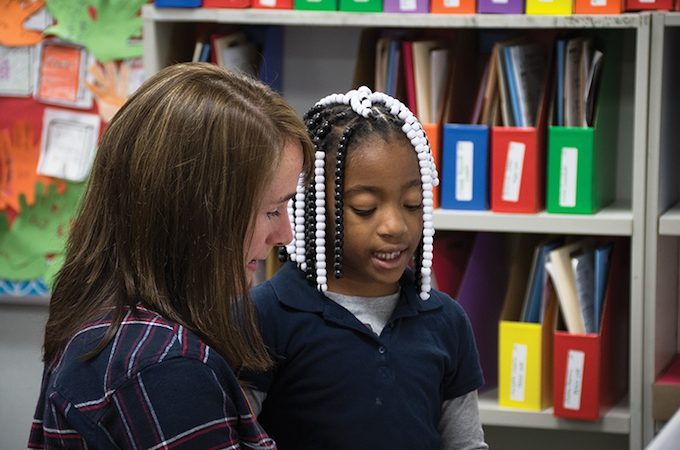 Growing Together provides no direct services, yet the nonprofit is the guiding force in changing the physical, social and educational landscapes of two of Tulsa’s most promising neighborhoods: Kendall Whittier and Eugene Field.

The idea is to unite organizations, residents and teachers to advance the quality of education, bring communities together and invest in the neighborhoods’ physical environment.

A tall order, for sure. That’s why Growing Together assembled gold-standard partners — including Communities in Schools, Talent Development, Reading Partners, City Year and the local YMCA — to collaborate in improving students’ futures.

“We’re the supporters of the tapestry,” says Kirk Wester, Growing Together’s executive director. “We help them work effectively, to feel supported, so they can do amazing work.”

Other strategic partners have been added to the holistic mix, including the University of Tulsa, faith-based groups, Habitat for Humanity and Capital Homes.

Why so many partners? “I always assume there’s someone out there who knows how to do this better than I do,” Wester says. 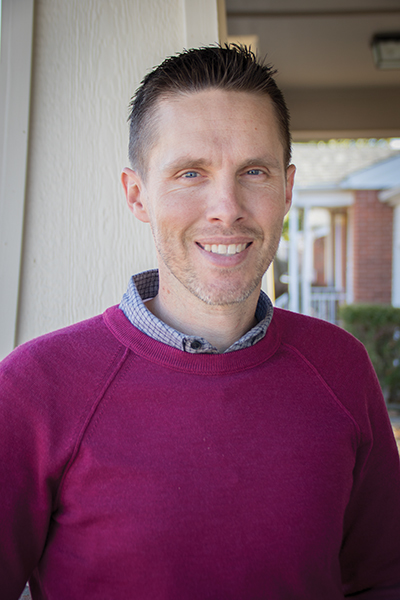 This is more than a job to him. It’s a calling. Wester grew up in Broken Arrow and married in 1996. Two years later, the couple decided to move into “a struggling neighborhood.” They chose Kendall Whittier, Tulsa’s red light district at the time. He and his wife felt strongly that they needed to be intentional about their support of social justice; that the best way to support a community was to be a part of it. They believe justice is truly a lifestyle.

Within a short time, a steady stream of projects popped up to improve the area led by a push among residents in the mid-1990s. Ultimately, in 2010, the George Kaiser Family Foundation, Community Action Project and Tulsa Area United Way decided to join forces to further ramp up the trajectory. GKFF provided funds to CAP, which formed a department in 2010 that ultimately resulted in Growing Together.

The holistic approach started with improving third grade reading levels, one of the key measures in school success. Partners such as Reading Partners and City Year were assembled to provide the services necessary to support young students. Growing Together became an independent organization in 2014, but maintains a close relationship with CAP.

Impact Tulsa, a nonprofit dedicated to high-quality education for all, conducted a study about Tulsa schools, which showed that although quality education is vital to every student, the greatest determiner of any child’s success is breaking the concentration of poverty within the school.

Armed with that information, Growing Together expanded its focus to include neighborhood revitalization. To involve families and communities. To tear down poverty and attract middle incomes.

Step one was to improve school quality. Parents who could afford it were transferring their students out of the area. “We have to get to a place where our schools are sought after by all people,” Wester says. (Read on to learn how member agencies contribute to this effort.)

Step two was to get people to be neighbors, followed by connecting them. Today, Growing Together employs three full-time community organizers, who develop strategies to connect neighbors, like Zumba classes, soccer tournaments, movie nights and community dinners.

“For us to be sustainably successful, we can’t be 100 percent free lunch,” Wester says, meaning the neighborhood has to work toward a 60-40 poverty-to-mixed-income ratio to succeed.

Amid these changes, however, special care is directed to make sure current residents are not priced out of their own neighborhoods. The creation of a community land trust assures affordability while protecting against gentrification.

Successes in this arena include West Park apartments, a mixed-income development at 2405 E. Fourth St. that now has a waiting list. Capital Homes, builder of 17 market-value homes in Kendall Whittier, offered $4,000 in closing costs; $4,000 was offered through TU as down-payment assistance to TU employees to live in the area. Capital will build up to 10 homes in the neighborhood in the future and will continue to offer its incentive, along with $4,000 offered by Growing Together for teachers at Kendall Whittier and Sequoyah Elementary Schools and Rogers Junior High. Additionally, Habitat for Humanity has designed a new business model that gives owners equity in their new home on the day they move in.

In December the Westers moved into a new-construction residence, their third home in the neighborhood.

Three years ago, Growing Together brought the country’s No. 1 dropout prevention program to Tulsa. Communities in Schools of Mid-America created a local office in Tulsa, and Jania Wester, Kirk’s wife, became executive director.

The organization supports schools and individual students, academically and socially. They can help schools with universal issues such as bullying or attendance, and provide case management services for students at risk of dropping out.

“Our students have adverse experiences on a daily basis,” Jania Wester explains. “We care for students after the loss of a home, following a visit to an incarcerated parent or in cases of neglect.”

Jania Wester was a teacher and assistant principal at Kendall Whittier Elementary and a principal at Zarrow Elementary before joining CIS. “I wanted to get back to the folks I have a heart for — the Latino community, the impoverished and voiceless,” she says.

Because CIS helps with non-academic issues, dedicated educators can focus on teaching. “In a climate and culture of support, teachers feel more validated,” she says. The outcomes are nothing short of remarkable for CIS caseload students: 90 percent stayed in school, 94 percent were promoted and 94 percent of targeted seniors actually graduated. 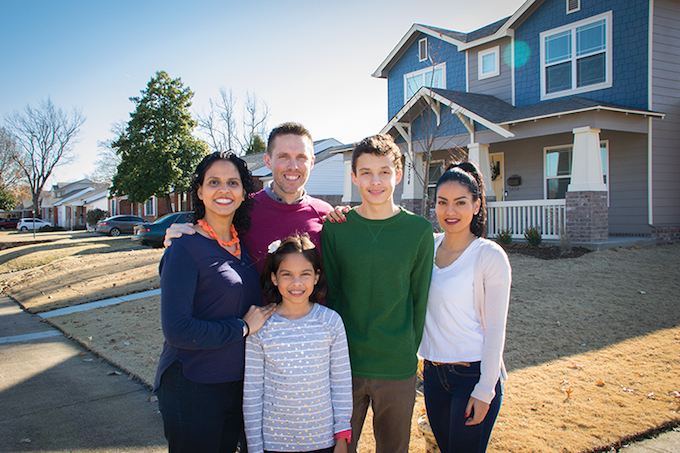 “Education is the great equalizer,” says former TPS teacher Libby Tillotson, executive director of Talent Development Secondary in Tulsa. “No one can take it away. And it opens doors like nothing else can.”

Tillotson’s organization is an important cog in the collaborative Growing Together wheel. The program was developed by the Johns Hopkins University’s School of Education to support teachers, and help teachers help students.

Teachers are trained to use the Hopkins Early Warning Indicator system to monitor three key components (ABCs): Attendance, Behavior and Course in math and English. When teachers and counselors identify students who need special  attention, they work together to develop interventions.

For example, the system flagged an elementary student whose grades were slipping and who was breaking class dress code rules. The team of educators discovered the girl was experiencing problems at home, and was able to customize an intervention with the family. The group’s collaborative efforts resulted in the girl’s improved grades and an end to her behavior issues.

Studies have shown that if a student is off-track with just one component by sixth grade, there’s only a 25 percent chance he or she will graduate on time or at all.

Tulsa produces some of Talent Development Secondary’s best results nationwide, putting 67 percent of students who are off-track back on a path to success. 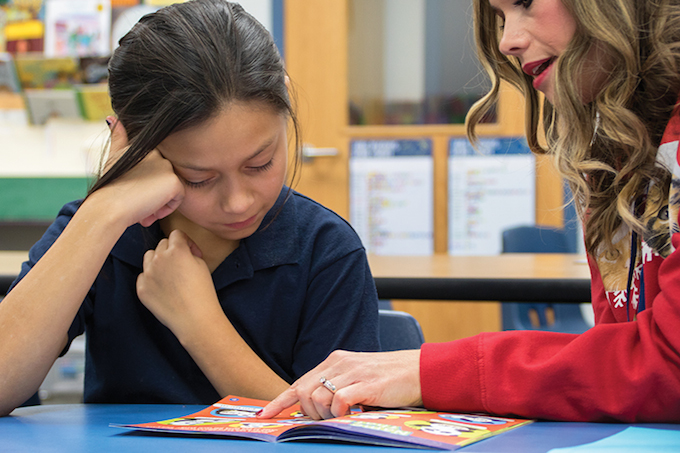 The path to success also involves helping young students read at grade level. Reading Partners — a nonprofit that provides one-on-one tutoring by pairing community volunteers and struggling readers — serves 1,300 students in 24 reading programs at 22 schools in the TPS district — including the 325 students served by Growing Together.

Program Director Jessica Smith was an assistant principal at Kendall Whittier when she heard Reading Partners was coming to Tulsa. She thought the job description was written for her.

Students need to read proficiently to learn science, history and all other subjects. Missing this milestone can be catastrophic. Children who can’t read at grade level by the time they get to fourth grade are four times more likely to drop out according to a report from the Annie E. Casey Foundation.

Reading Partners volunteers build positive relationships with their students simply by paying attention to them individually and being there consistently.

“Students with low confidence grow tremendously through this,” Smith says.

“It’s a great way to change a kid’s life. No place else you can volunteer and do that in an hour.” Potential volunteers can sign up at readingpartners.org. 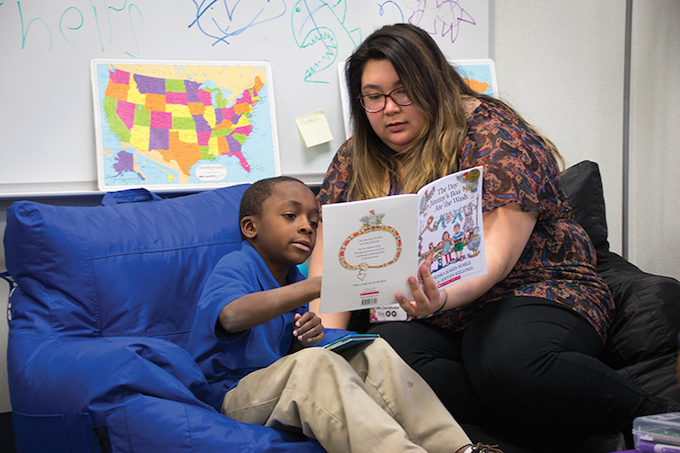 While even a few hours a week of extra attention can make a huge difference to a struggling child, sometimes a more constant presence is needed for broader results. Enter City Year Tulsa.

“We are the extra people, power and hands to reach the needs of the students, through the whole school and individually,” says Hollis McAllister, City Year’s chief of staff.

City Year’s 17- to 25-year-old full-time tutors, mentors and role models show up before school starts and stay long after the last school bell of the day. Their job: to create a positive school climate and increase graduation rates.

“The beauty I see is in near-peer relationships,” McAllister explains. “Our volunteers aren’t much older than the students they mentor. Students confide in them as they might not with other adults.”

McAllister herself was a City Year volunteer in an underprivileged Boston school. “My world changed meeting those kids,” she says.

A fourth grader she met there became the little sister she never had. “She struggled with the same things I struggled with at that age, but she gained the confidence I didn’t have,” McAllister says, adding proudly that the girl graduated from eighth grade as second in her class.

“I came in (to the program) not having confidence as a leader,” McAllister adds, “but I did see myself as someone who can make a difference.”

90 percent of the off-track students at Kendall Whittier Elementary improved in English Language Arts (ELA) from start-of-year to mid-year.

178 of 216 ELA students improved reading assessments (SRI) scores from start-of-year to mid-year with average growth of 79 points across all grades; 102-point average for elementary schools and 56- point average for secondary schools.

106 of 169 math students improved in their math assessment scores from start-of-year to mid-year with an average growth of 63 points; 92-point average for elementary schools and 20-point average for secondary.

“We have to get to a place where our schools are sought after by all people.”

The YMCA was the logical choice for after-school services in the Growing Together partnership since it already managed similar programs in four Tulsa-area school districts.

The staff does far more than babysit. “We help with homework, provide 30 to 60 minutes of moderate activity, and provide nutritious snacks and lessons on nutrition,” says Caitlin Turner, YMCA senior director for educational initiatives. Students have access to education specialists in science, technology, engineering and math, as well as performing and visual arts.

The Y extends learning times for school breaks, summers and even weekend events for students and families. These Kendall Whittier and Eugene Field elementary student services are free, and operate on a referral basis.

The vision is for the elementary school to become the community hub — the gathering place. Not just for students, but where seniors, parents and kids of all ages can learn and experience new things. “This creates deeper connection to the school, so school becomes a priority,” Turner says.

She is proud the Y is a Growing Together partner. “We really get to dream big. We have the freedom to imagine what all these connections and collaborations look like … on a large scale,” she says.

Although there is still much work to be done, the tireless staff, volunteers and supporters at Growing Together and its partner agencies no longer have to imagine what those ideas might look like in action. In 2013-14, all Growing Together elementary schools saw gains in third grade reading proficiency. During 2014-15, Clinton Middle School and Webster High School saw dramatic reductions in students failing English and math, being suspended and poor attendance.