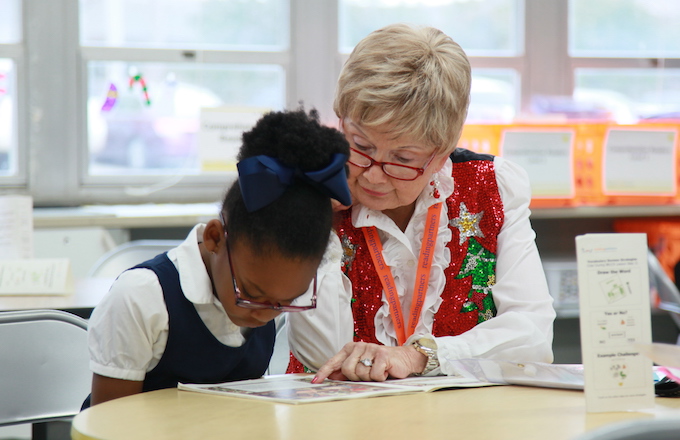 December had rolled into Charleston, bringing along crisp winter breezes and holiday tunes on loop. There was a spreading of cheer in the Lowcountry, and that included the schools. Students of all ages were anticipating winter break, including Reading Partners’ young students who shared their excitement with equally enthusiastic tutors and AmeriCorps members.

During all this, unsuspecting Paige Turner worked a typical nine to five job with a generous lunch break in the afternoon. On what seemed like an ordinary December day, Paige learned from her supervisor that Christine, a representative from Reading Partners, would be at their office to talk about the Reading Partners program and recruit volunteers.

Paige Turner had already heard about Reading Partners from a co-worker, Brooke Mark, who had been volunteering with them for over a year. Brooke often came back from her tutoring session enthused over her student’s progress, and that week in particular, Brooke had been raving about the holiday celebrations at her reading center. Paige reluctantly joined Brooke to meet Christine, although she had projects to complete and emails to answer. Christine was very informative about the organization and went above and beyond to answer all of her questions.

That day, Christine received several volunteer inquiries from members of the community, but none from Paige. Paige was still unsure; despite all that she heard. She felt overwhelmed by the prospect of effectively tutoring a student of her own. Would she really fit as a tutor? She wasn’t even a teacher nor had she ever really worked with kids! But, more importantly, what if she didn’t do well?

Paige didn’t want to unintentionally do more harm than good. These thoughts kept fueling her doubts as she headed home. That night, Paige went to sleep thinking it would be best if she just forgot about Reading Partners altogether!

The story could very well end there, but then it wouldn’t make for a very happy story…

What Paige didn’t know was that she wouldn’t be the first nor the last to be unsure about volunteering. But fortunately, the world is filled with good people willing to do good things, even if it takes just a small nudge. Later that night, she would get just that.

Paige Turner went to bed around 10 pm that night. She slept peacefully until the stroke of midnight when her doorbell rang. Paige sat up in bed and checked the time. She quickly grew confused as to who would ring up at this time of night before she went to check the door.

Looking through the peephole, Paige saw a familiar figure, Christine, standing right outside. She creaked the door open a smidge, and Christine cheerily greeted her, “Good evening! You were interested in volunteering for Reading Partners, right?”

Paige Turner blinked away her drowsiness and stared at Christine in disbelief. “I…I decided I wasn’t ready. More importantly, why are you at my house so late?!”

“It’s a shame to hear.” Christine held out a folded rectangle of paper. “Here’s one of our brochures in case you ever want more information. As for why I’m here, well, I’m not really.

Paige continued to stare at her after taking the pamphlet. “What?”

“You want to volunteer and just aren’t sure about committing just yet. Tomorrow, you’ll be visited by three spirits of volunteering. We hope they will help you out!”

“I-I don’t understand. What do you even mean by that?” Paige glanced down briefly at the brochure before looking up again, only to see that Christine was no longer on her doorstep.

Utterly confounded, Paige Turner returned to her room, setting the pamphlet on her bedside table. She went back to sleep, and the following morning, she found no pamphlet at all. Without much to show for that night, she concluded that it all had just been a dream.

To be continued: Check back next week for Part II of A Reading Carol.