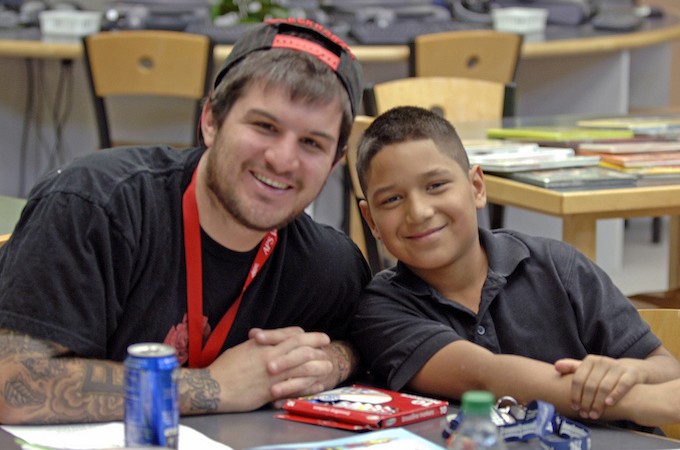 A few years ago, Deric Pinales was on the battlefield in Iraq. On the frontlines of the war, Pinales saw unspeakable violence, lost friends, and suffered physical and emotional trauma. When discharged with full benefits in 2011, he left the army with Post Traumatic Stress Disorder, Traumatic Brain Injury, and haunting memories of the realities he faced in the field.

Meanwhile in Aurora, Colorado, Sable Elementary School student Jason was fighting a different battle. With each passing school year, he slipped further behind in reading. His motivation was dwindling, too, and by the time he arrived in third grade he was reading at only a kindergarten level. In class, he was neglecting to turn in his homework and often seemed tired and disengaged.

Upon returning to Colorado, Deric knew he had to keep himself busy in order to avoid the flashbacks, nightmares, and anxiety that came with his disorder.

I realized that if I couldn’t help defend my country, I needed to find other ways to give back.

When Deric came upon the Craigslist ad for Reading Partners, it called out to him right away; he thought of the children he saw while in Iraq. “A lot of them hadn’t been to school in years because they had to work to provide for their families, and some could barely read. It broke my heart, because that’s no way for any kid to grow up.” He resolved that when he returned to the States he would do anything he could to help future generations.

Before Jason Reads, You Have to Read Jason

When Deric first met Jason in the Sable Elementary Schoollibrary, he knew instinctively that what the boy needed was one-on-one attention—someone who could listen to him and really hear him. They told each other about their interests, comparing PlayStation to X-Box, and baseball to soccer.

From across the room, Lisa Waters, Reading Partners’ site coordinator, looked on hopefully. Jason was alert and on the edge of his seat as Deric talked. When the session was over, Jason stopped by Lisa’s desk long enough to say, “Thanks for giving me the army man with the tattoos. He’s cool.”

In the weeks and months that followed, Deric and Jason fell into a comfortable rhythm: they share which video games they’ve played since their last session and then get straight to work. Whenever Jason begins to lag, Deric pulls out a stick of what he refers to as ‘energy gum.’ At the end of every session, Deric starts a game of Handman (Reading Partners’ version of Hangman) using the letters of a difficult word from that day. He also makes certain to include constant positive reinforcement. “I give Jason credit all the time,” Deric says.

The kid works so hard and he doesn’t realize how good he is.

Within a month of tutoring, Jason’s teacher, Christa Burson, saw changes in his school performance. He not only began handing in homework, but he stopped falling asleep in class and he started bringing his backpack to school every day. He even turned in weekly book reports on a voluntary basis and prodded Ms. Burson for more books to read.

By the end of the 2012-13 school year, Jason’s reading had advanced two full grade levels, and Jason and Deric had formed a strong bond. “Deric is constantly thanking me for giving him the opportunity of working with Reading Partners,” says Lisa Waters, who is hoping the veteran will take more children under his wing next year. “I have a lot more boys who can benefit from him. You just never know what one interaction like this can do to change a life.”