Twenty years ago president Bill Clinton signed the National and Community Service Trust Act of 1993, which established AmeriCorps and the Corporation for National and Community Service (CNCS). Today, CNCS serves millions of Americans through its core programs (AmeriCorps, Senior Corps, and the Social Innovation Fund) and provides opportunities for individuals to give back to their communities.

As AmeriCorps marks 20 years of service, CNCS is calling on YOU to show your support by committing to get things done. Whether you’re an AmeriCorps alum, current member, relative, fan, or friend — you can show the world the power of service. In addition, Americorps communities across the country will gather together on September 12 to recommit to the Americorps pledge. In all 50 states the pledge will ring, “I will get things done for America – to make our people safer, smarter, and healthier…”

Here is a look at some noteworthy Americorps members who have served with Reading Partners throughout the years: 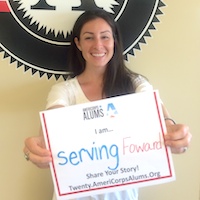 Nicole Vera “I am serving forward”
Years of service: 2008-09
Nicole’s journey began in 2008 when she decided to leave the Organization of American States in D.C. and serve as an AmeriCorps member in Denver, CO. Even though it was a big step, it turned out to be one of the best decisions she had ever made. A decision that lead to her passion for service and leadership. Nicole went on to manage the Community Building Partnership for Youth in Transition (where she originally served as an americorps member) for three years. Then, in September 2013, she decided to leave the United States for 11 months to travel the world and volunteer. She lived in Peru to deepen her connection to the country and culture while exploring her own Peruvian heritage. During her time abroad, she worked with the Sacred Valley Project, a U.S.-based nonprofit in Peru and a local nonprofit in Geita, Tanzania. Upon returning to the U.S. in December 2013, she re-entered the Ameri-world, this time as an AmeriCorps program manager with Reading Partners. 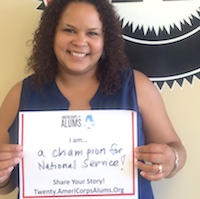 Brittany Prince “I am a champion for national service”
Years of service: 2010-12
Brittany was recently honored as an AmeriCorps Alums 20th Anniversary Leadership Award winner. Brittany served as a site coordinator with Reading Partners at Bret Harte Elementary School in San Francisco. Brittany is currently an AmeriCorps program manager and training specialist with Reading Partners. As the training specialist, Brittany oversees the Reading Partners Leaders in Training (LIT) program, which provides leadership and professional development opportunities for returning AmeriCorps members. Brittany is also an evening lecturer at San Francisco State University (SFSU) for the college of ethnic studies, teaching African American literature courses. Starting in the fall of 2014 she will be pursuing a doctorate in educational leadership through a joint program at SFSU. 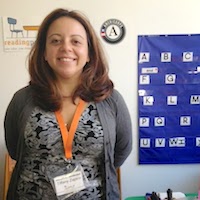 Tiffany Zapico “I am an Ameri-lifer”
Tiffany is an NCCC corps member-turned team leader-turned Reading Partners program manager. As an NCCC member, she worked in the pacific region on disaster relief projects such as re-building in the Gulf, post-Katrina. Tiffany calls herself an Ameri-Lifer! After her service term with NCCC ended she went on to found the NCCC Leadership Council. She extends her passion for service to others by creating opportunities for leadership and by motivating members to become more than just members, but lifelong advocates of AmeriCorps. Tiffany is currently a Reading Partners program manager in New York, managing 6 AmeriCorps members. 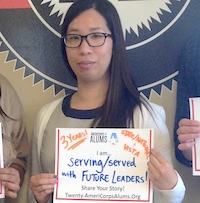 Carlo Delgadillo “I am helping students learn to care about their community”
Years of service: 2011-14
Carlo served as a site coordinator for three years with Reading Partners. First at Sanchez Elementary School in San Francisco, CA and then two years at Bret Harte Elementary in San Francisco. Carlo is currently finishing up his teaching certification while teaching 2nd grade at Bret Harte where he finished his AmeriCorps service in 2014. 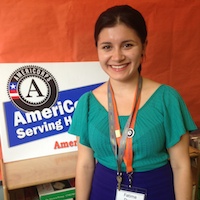 Fatima Duran
Years of service: 2012-14
Fatima served first as a Reading Partners volunteer coordinator in San Francisco during the 2012-13 school year. She then moved to New York to serve a second year as a site coordinator with Reading Partners New York at Girls Prep Elementary School. Fatima is currently attending Columbia University in New York where she is pursuing her masters in education. 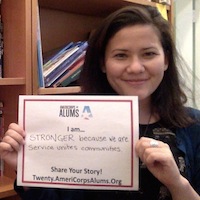 Naomi Sachter “I am stronger because we are: service unites communities”
Years of service: 2012-14
Naomi served two years a volunteer coordinator with Reading Partners Washington, DCbefore being hired as full-time community engagement manager for Reading Partners. As a high school student, Naomi witnessed the power of AmeriCorps within her own school. She admired the leadership of the AmeriCorps members at her school and decided when she grew up she wanted to be one too. During her service term, Naomi recruited, trained, and coached volunteers in Washington, DC. She also established partnerships with community organizations that increased Reading Partners’ volunteer base in DC. She’s an active member with the DC AmeriCorps Alums chapter and continues to advocate for AmeriCorps in her new role. 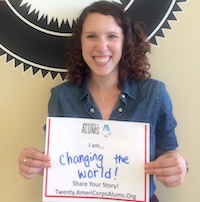 Sylvie Lane “I am changing the world”
Years of service: 2012-15
Sylvie is beginning her third term as an AmeriCorps VISTA. She served her first term with Points of Light at the Jewish Coalition for Literacy in San Francisco as a program associate.After serving as a VISTA member at the Jewish Coalition for Literacy, Sylvie became the VISTA leader at Reading Partners. She will complete her second term with Reading Partners during the summer of 2015.