Diverse mentors matter for our students 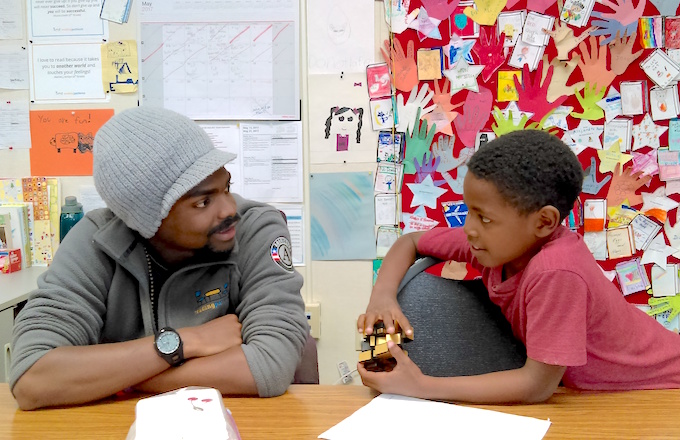 By four o’clock Friday afternoon, a quiet calm settles across the elementary school campus. The custodian begins making the rounds, a string of children’s forgotten sweaters is hung up on the fence, and just a handful of students wait anxiously to be picked up from the after-school program. At F.D. Roosevelt Elementary, one classroom door will remain open even after the last student leaves: the reading center.

On this Friday, Reading Partners site coordinator Calvin Williams is talking to a third grade student, Daniel*, about book reports and Rubik’s Cubes. As he wraps up his final tutoring session of the week, Calvin allows Daniel a few minutes of playtime with the colorful toy in exchange for some updates about the latest book he’s reading. Calvin and his impressive Rubik’s Cube collection are very popular around campus, and even though Daniel has finished his work for the day, he’s in no hurry to leave the reading center.

Calvin’s literal “open door” policy and welcoming demeanor make the reading center a place where students feel encouraged and capable. As an African American man who grew up just blocks away from Roosevelt Elementary, Calvin identifies with his students’ experiences and serves them not only as an educator, but as a role model.

New research shows that the influence of mentors like Calvin can be seen in student outcomes long after elementary school. A study reported in a recent article by NPR Ed finds,

Having just one black teacher in third, fourth or fifth grade reduced low-income black boys’ probability of dropping out of high school by 39 percent.

How are black educators boosting graduation rates and leading more students of color to higher education? Calvin’s story illustrates the power of diverse mentorship and shows how important it is for children to see themselves in their educators.

Reflecting on the path he took from elementary school in South LA, to Marymount University, and finally to two terms of service with AmeriCorps, Calvin credits much of his success to the mentorship he has received from members of his community.

Calvin openly shares with his students that he was quite a troublemaker in early elementary school. At the time, he was struggling from the loss of his grandfather, who served as his main role model, and he acted up in class to get attention. He says, “Sometimes it seemed like certain teachers didn’t want me to raise my hand, so I started to have a hard time engaging and being a part of the conversation in class. I started to think that maybe what I had to say wasn’t the right answer.”

Later in his elementary years, the encouragement of a teacher caused a shift in attitude. “Mr. Robbins was a teacher of color that had a big effect on me,” says Calvin.

“He would push us, but later on I realized that the kids he was really pushing were actually his favorites.” Calvin smirks as he recalls, “I was still a class clown. He would hear me rapping to myself, and he’d call me up to the front and tell me to rap in front of the whole class! I had a love-hate relationship then, but now I appreciate him because he helped make me who I am today.”

Throughout childhood, Calvin says he learned by observing the example of others. His earliest memories of books came from observing his mother reading avidly and realizing that reading was an important part of life. He feels humbled by the opportunity to now be a role model for others, and he’s working hard to make a lasting difference in his students’ lives. “I really like helping people get to their next level, and that all comes together at Reading Partners,” he says.

As a site coordinator, Calvin has the opportunity to work one-on-one with students who are struggling in reading, and help them build confidence through patient, caring support. Calvin identifies with students who might be doubting their ability to succeed in school, but he sees their potential. 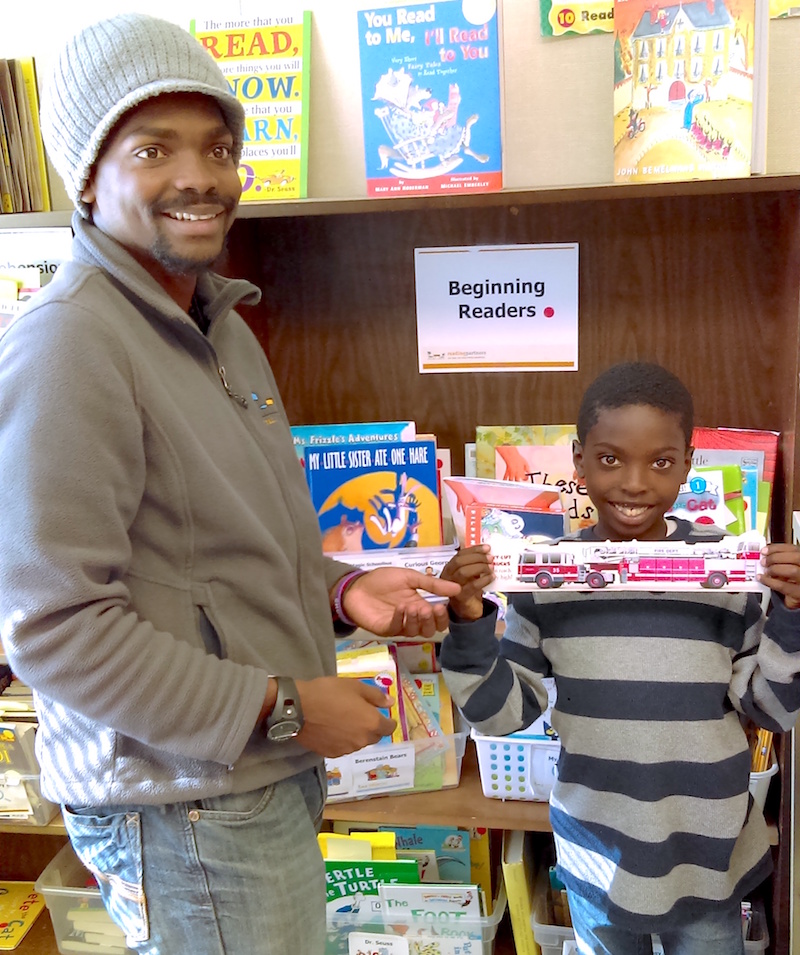 He is especially proud of the progress of one student, Malik*, who started the year believing that he couldn’t read preschool-level books. There have been plenty of tough moments where Calvin has had to push back against Malik’s self-doubt by being his biggest fan. Calvin says, “It’s about all of those little affirmations, and reminding him that he’s the one who really did all of that work. You have to take time to sit with them, to target that moment when they feel like they’re defeated, and be that lifeboat and tell them, ‘We’re not letting you drown. We’re here, your tutor’s here, and it’s all for you.’”

Perhaps Calvin’s most significant impact as a mentor of color is his ability to make students like Malik feel seen for their potential. “I always let them know that they can come talk to me. I treat them like they’re little people—not just kids, but human beings. And when we talk, I can also learn from them.”

Diverse mentors are vital because they can help students of color see their own potential, and inspire them to set greater goals for themselves. Calvin concludes, “It’s just like what I used to do with my mom and reading—it comes down to observation, and visualizing how they could be successful…”

*All student names have been changed for confidentiality purposes. 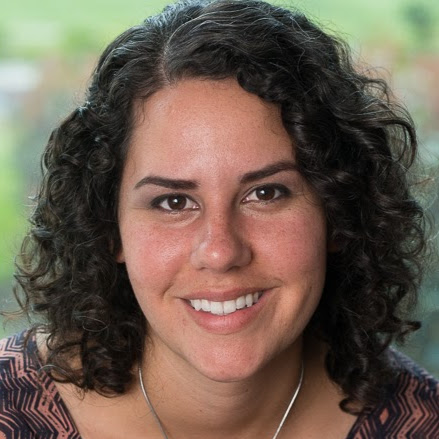