Igniting a love of reading with comic books 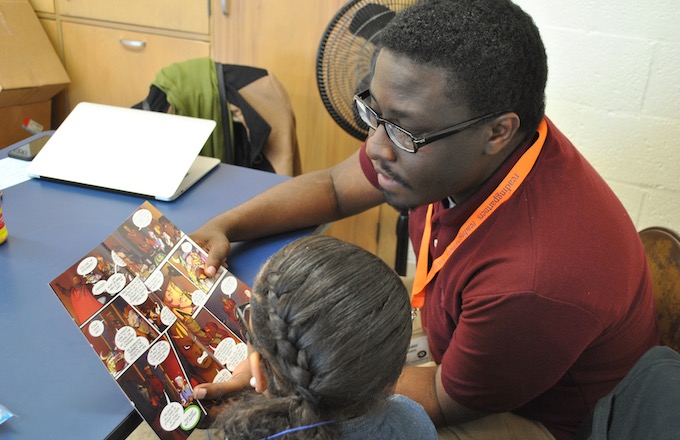 Perry McAlister, site coordinator at Moravia Park Elementary School with Reading Partners Baltimore, recounted how all the color would drain from his third grader’s face whenever she was expected to read. When Perry and Diana* first met, Diana came in for an assessment to evaluate her reading skills. During the assessment, she got really sad and confessed that she struggled with reading.

As an attempt to make reading fun and engaging, Perry decided to introduce Diana to his favorite superhero, Wonder Woman. “I read [Sensations Comics featuring Wonder Woman #9] to her and it was love at first sight. She completely fell in love with the character and the idea of the character,” Perry said. “You meet her today and she is always so enthusiastic and ready to read. She started reading chapter books. [Also] she is starting to challenge herself, and believe in herself.” 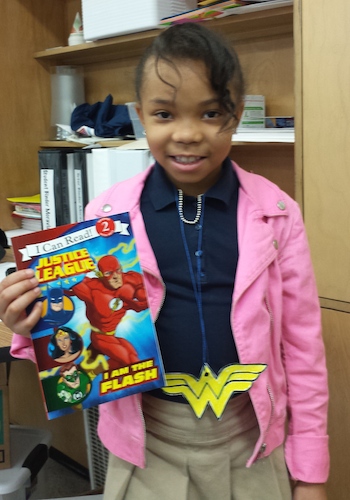 Perry has taken it a step further by creating a Wonder Woman inspired emblem that Diana can wear every time she comes to the reading center. “It’s become her rallying cry. It’s something she takes pride in and it makes her feel special. So much of her struggle has been her confidence. I look at her, and I see a kid that has so much potential, spirit, and heart,” Perry explained.

When asked what she loves about comic books, Diana replied, “They are fun, funny, and cool!” She had no problem listing all the elements about Wonder Woman that she loved, such as Wonder Woman’s lasso that makes people tell the truth and her home on Paradise Island where boys aren’t allowed. “I like everything about Wonder Woman,” she continued.

Diana isn’t the only one at Moravia Park who has developed a love for reading after being exposed to comic books. Perry has witnessed several students in the program become motivated to learn how to read because of the comics that have been coming into the reading center. “One of my kids has been begging his tutor to buy him his own copy of a Captain America book that we have all year,” claims Perry.

This year, comics have been the most popular books in the center’s Take Reading Home library. As a result, Perry has been going online to find more age-appropriate comics for his students to read with their tutors. “The main superheroes all the kids know, like Marvel and DC, are aimed towards young adults or teenagers. So it can be tough finding [comics] that are appropriate for the elementary set,” Perry said.

We at GEM are dedicated to our community, and we are all about reading whether it is comics or just books.

GEM’s interest in becoming a supporter of Reading Partners began when they first learned about the nonprofit at a Baltimore Tourism Association holiday party. “My associate and I decided that it would be awesome to do a book drive and that’s where [the partnership] began,” Sharonda Quick said. 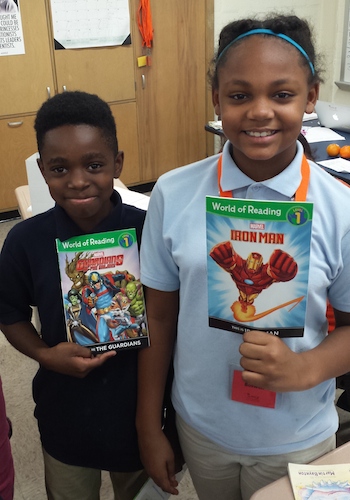 Why are comic books such a powerful tool to help encourage a love of reading? Quick believes, “Comics can help with learning to read by action. For a child, there is always a character that they can relate to or are interested in. With that, [comics] can engage them to want to know more, and they will do that by reading.”

Perry believes kids are drawn to the message that comic books send to the reader: “[Comics deliver] the idea of doing the impossible and being more than yourself. I think our kids, who have the odds stacked against them, need that.” It may be safe to assume that the answer to this question will differ depending on who you ask. But, as displayed by the students at Moravia Park, comic books can be considered an asset when nurturing a child’s passion of reading.

*Student name has been changed for confidentiality purposes