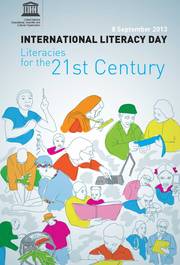 For the past forty years, UNESCO has been using September 8, International Day of Literacy, to remind the world that literacy is key to bringing about the changes we want to see in the world. This year’s International Day of Literacy focuses on “literacies for the 21st century.” Why literacies, instead of literacy? The thought behind this year’s theme is that we should expand our concept of “literacy” to include other forms of comprehending that contribute to peace and security.

What are those literacies that will help positively shape our future? What literacies are necessary for a happy, healthy life in the 21st century? And how are they connected to our more common conception of literacy, the ability to read and write?

The literacy of dignity. The comprehension that every human has the right to live in “the conditions of freedom and dignity” is a literacy of the 21st century I want to live in. With education comes the understanding that you have a right to be treated with dignity, to enjoy the respect which others live with around the world. Child labor, slavery, gender discrimination: these repugnant realities in modern society depend on a mental prison whose bars bend under the force of an educated mind.

This literacy is predicated on the most conventional conception of literacy—the ability to read and write. By being capable of deciphering the written word, one cannot avoid exposure to the ideals championed by free societies. The notion that it’s acceptable to force a child into hard labor or ban a girl from school is challenged when one encounters the constitutions and declarations of modern states, the blogs of human rights activists around the world, or the editorials and columns of modern newspapers like The New York Times, The Washington Post, and The Guardian.

Through education, people prime themselves to acquire economically valuable skills, which they can use to lift themselves out of poverty. As more and more of the globe becomes connected via the Web, more men, women, and children gain access to the texts, tutorials, and collected knowledge of the internet. The prerequisite needed to acquire these skills is the ability to read with confidence.

The literacy of tolerance. One of the root principles in social psychology is the bias known as Fundamental Attribution Error, which is the emphasis our minds place on internal personality characteristics to explain someone’s behavior, rather than seeing that behavior in the context of external factors. This is what happens when we consider our own behavior differently than we do another’s. A stranger steps on your dog’s paw? Your first reaction is to label him clumsy and inconsiderate, without considering that your dog may have moved its paw into his path.

These prejudices become more serious and their effects more insidious when they’re used to decide policy or inform social hierarchies. Our most atrocious behaviors as humans began as stereotypes sustained by prejudice: The Jewish Holocaust, American slavery and racial discrimination, the Rwandan Genocide, the Nanking Massacre.

To avoid this fundamental error requires one to be able to empathize with strangers, to “walk a mile in their shoes.” Here again, the ability to read is an essential and effective tool in making our world safer and more just. To read a story is to be transported into the mind and experiences of another human being, sometimes a human being very different from one’s self. Being a reader opens us to the experiences of strangers and helps us make sense of their behaviors, helps us understand the values we share in common. 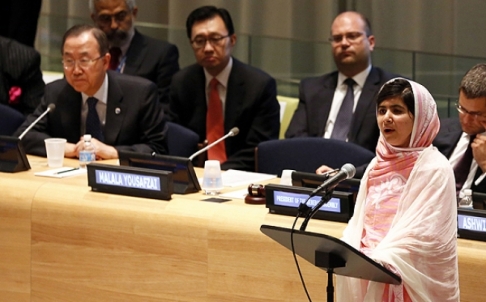 Malala Yousafzai, the young girl shot by the Taliban for her work to improve access to school for girls in Pakistan, is a living symbol of the power of education. In retribution for speaking out against the ban, Taliban gunmen shot Malala in the head as she rode home from school. So threatened by her fight to give all Pakistanis access to education, they attempted to assassinate an unarmed schoolgirl.

As we celebrate the power of literacy to bring about a better world—free from poverty, violence, and intolerance—let us rally behind Malala’s words, spoken before the UN’s General Assembly in July:

So let us wage a glorious struggle against illiteracy, poverty and terrorism. Let us pick up our books and our pens, they are the most powerful weapons. One child, one teacher, one book and one pen can change the world. Education is the only solution. Education first.