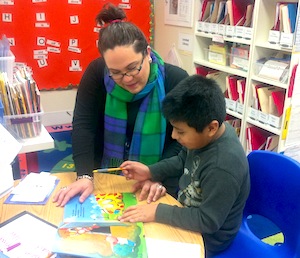 Israel and Ana clicked from the very first time they met in October of 2012. Looking back,  Israel says that he felt comfortable right away with Ana and she remembers that he “struck [her] as a very smart and sweet kid”.

In her position as Community Outreach Coordinator for Congresswoman Eleanor Holmes Norton, Ana is encouraged to volunteer, and as a native Spanish speaker, she was looking to volunteer in school with a significant Latino population. When Ana found an opportunity to volunteer with Reading Partners at DC Bilingual, a school that focuses on bilingual Spanish and English instruction, she thought that would be a great fit!

Ana tutors Israel, a bilingual student, who has greatly benefited from having a bilingual tutor. Since they are both able to communicate in two languages, Ana is able to help Israel work on honing in on his english language skills in reading and writing. Israel’s English has steadily improved throughout his time working with Ana.

Before entering Reading Partners Israel had been falling behind in his classroom and struggled to read basic sentences. But Israel, like most students, is a hard worker enthusiastic about learning–he really wants to do well. With a great attitude and passionate tutor by his side, Israel has gained over a year’s worth of reading skills in his seven months in the Reading Partners’ program.

After a fantastic first year, Ana rearranged her work schedule in Congress so that she could come work with Israel again. She had given him some books at the beginning of the summer and when they were reunited, Ana recalls that  “Israel was very excited to tell [Ana] everything that happened, down to the last detail.” 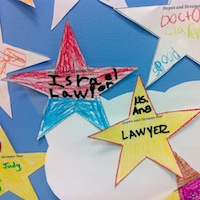 Israel is always happy to see “Ms Ana” and says his favorite part about working with her is completing worksheets and reading, especially Curious George. Ana says “Knowing that I am able to help Israel with his reading skills is very rewarding” and, beyond that, she’s learned from him how compassionate and caring kids can be.

When Ana and Israel first met they made stars to represent their dreams; Ana wrote she wants to be a lawyer and Israel wrote that he wanted to make pizza. This year, they had the chance to make new stars and both simply say “Lawyer.”