The Towers Are Still There 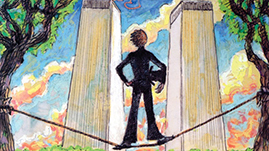 Having a view of what is now referred to as The Freedom Tower in my center, I couldn’t help but remember the significance of today’s date. As I switched out books from my curriculum to make necessary updates I pulled out The Man Who Walked Between the Towers by Mordicai Gerstein.

The first page reads, “Once there were two towers side by side. They were each a quarter of a mile high; one thousand three hundred and forty feet. The tallest buildings in New York City.”

Now that I live in New York l know that if we were to take the subway and get off at the stop that takes us to those towers, we would see that the sign there reads “9/11 Memorial” because those towers are no longer there.

I stood in front of where the towers no longer are after work today. I looked up at where The Freedom Tower currently is. I had to visit the memorial because this date always triggers memories of sixth grade, of the day I walked into school and my classmate held out a newspaper that said something terrible had happened in New York City. The face of worry and fear my teacher failed to mask because she had family in the East Coast is one I can’t forget. It was one of those rare days I didn’t feel safe at school. I couldn’t feel safe anywhere because even though I was in San Francisco, the image of a plane crashing into towers repeated on the television all day long. Distance became a word that described the miles my physical body was away from the bodies of others not a representation of how close I actually felt to the panic among New Yorkers.

In front of the 9/11 Memorial is a wall covered with the names of fire fighters who, like those towers, are no longer here. The words “May we never forget” has been engraved into the same wall and although I’ve heard that phrase in other settings, it has never struck such a chord with me. 9/11 is something I experienced. It is something we lived and every time we share our stories about that day we add to the collective memory of that event.

The students we serve may not have memories as fresh as ours but books like The Man Who Walked Between the Towers can help tutors remind students it happened. Because they, like us, lived in a world where the towers did exist, they can personally speak on the last page of the book which says, “But in memory, as if imprinted on the sky, the towers are still there.”

The memories of those two buildings, their destruction, and the lives it has impacted are still with us 12 years later. Those thoughts will continue to exist in our mind every time we remember those who are no longer here and those we have yet to empower in this country, especially in New York.

Yet as an organization affiliated with AmeriCorps, which this year will participate in the 9/11 National Day of Service and Remembrance, we have the opportunity and responsibility to put our collective memories into collective action. I am helping to coordinate our service day in New York and hope to incorporate this book into our reflection.

Wherever you may be serving this year, I encourage you to never forget 9/11 and contribute to the positive work that has yet to be done.

Fátima Durán is a member of the Reading Partners AmeriCorps team. She currently serves as a Site Coordinator at Girls Prep Lower East Side in New York City.