From volunteer to teacher: A site coordinator's path to a career in education 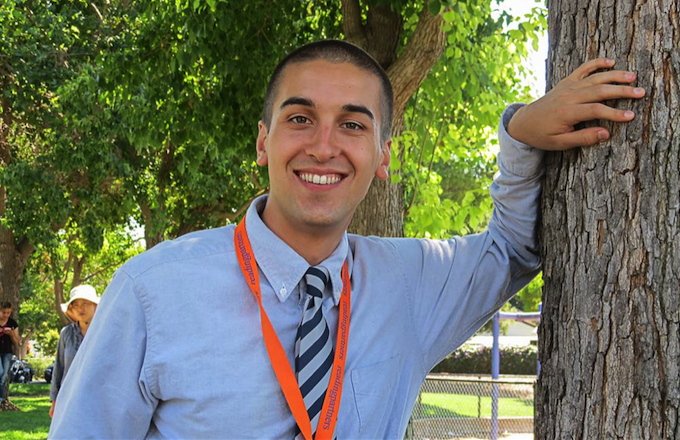 Since beginning his journey with Reading Partners Silicon Valley, Senior Site Coordinator Casey Dzubur has played several roles in the organization. He began as a volunteer tutor and is currently finishing his second AmeriCorps service term. Each step along the way has brought something new to his experience, culminating in his decision to pursue a graduate degree in education in fall 2017.

Casey’s love of learning began in childhood. “Reading always came naturally to me,” he says. This ability was supported by his parents, who read to him every night and even began introducing literacy-related activities as early as preschool. As Casey grew older, his relationship with reading remained strong. In high school and college, he used reading as a way to wind down from the stresses of school and work.

His own teachers also played an important role in fostering Casey’s love of learning. His fourth-grade teacher, Mrs. Heintz, was particularly influential:

I can still remember all the different types of clouds and weird specific things about meteorology. She took that subject and made it come alive.

This interactive approach to teaching really made an impression on him. Casey hopes to follow the example of teachers like Mrs. Heintz and to inspire his future students. He believes that the role of a teacher is to introduce a subject, but that independent practice is what truly makes things stick.

Based on his positive role models, it made sense for Casey to be drawn to a career in education. However, he wasn’t initially planning to become a teacher. He knew that he wanted to work in the realm of early childhood education, but was not sure where he could best make an impact on young students. As a legal studies major at the University of California, Santa Cruz, Casey originally intended to go into education policy and influence change behind-the-scenes. He even started work at a law firm after graduation. It was not until he began tutoring with Reading Partners that he changed his mind. 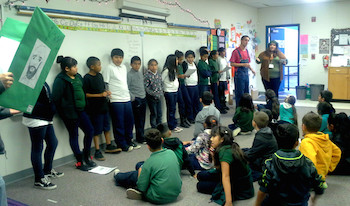 Casey came across Reading Partners in spring 2014 when he began to search for ways to volunteer in the community. He had only been tutoring at Ernesto Galarza Elementary for a few weeks when the school’s site coordinator mentioned that there would be job openings at Reading Partners Silicon Valley for the following school year. Although he had not previously worked in such a position, Casey seized this chance; he was excited to explore the depth of literacy development that the site coordinator position offered and work with a multitude of students. Since that time, he has come to find his place as an educator. He says, “it was the hands-on learning and opportunity to watch students grow that made me realize I wanted to work in the classroom.”

Helping students unlock their literacy skills with Reading Partners has opened Casey’s eyes to some of the challenges of being an educator. For example, he recognizes that it is often difficult to incorporate innovative methods into the classroom when teachers are already required to cover certain material. This is a challenge we see in many of our elementary schools, where class sizes are so large that teachers are unable to address each student’s individual needs.

One of the most difficult tasks is inspiring students who have already struggled to keep up with their peers. Not only do their academic skills need support, but they also lack self-confidence. Despite this challenge, Casey argues that the best way to encourage struggling students is to “make them know that there are role models and other people in their lives rooting for them … actively working to help them succeed.” 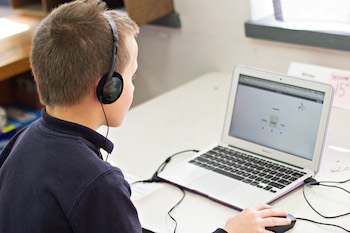 He argues that technology is a crucial tool that can help address some of the challenges faced by teachers, such as bridging the gap between required material and individualized learning plans. Although he believes that technology is currently under-utilized in mainstream classrooms, it has the potential to relieve some of the burden put on teachers to implement individualized education plans.

“The coolest part of ed-tech in the future is finally having access to technology that encourages active engagement with the subject material. This technology will transform the landscape and allow students to use multiple senses to manipulate information and utilize their skills in different ways,” says Casey.

As his students progress, Casey experiences many rewarding moments as a site coordinator with Reading Partners. His favorite point is when students’ eyes light up as they finally comprehend something that they have previously struggled to understand. “That pure unadulterated excitement is what makes everything worth it.”

Casey’s time serving with Reading Partners has given him the classroom experience and focus to begin a great career inspiring young minds. It’s exciting to think about the ways in which passionate teachers and powerful technology can intersect to empower students, giving them the skills to succeed in school and life.