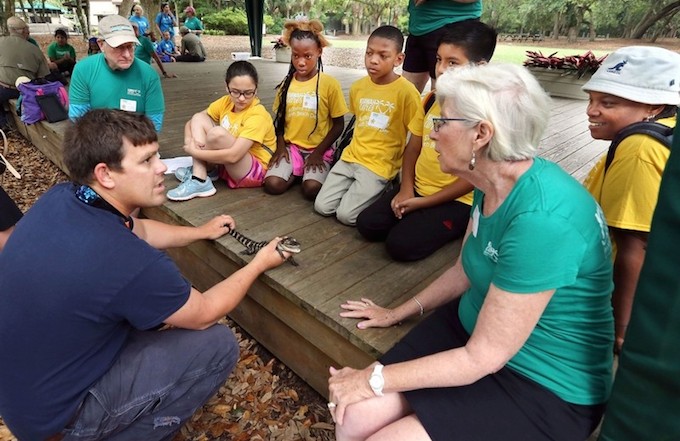 But this little guy, his belly in the palm of biologist Andrew Kreminski’s hand, is roughly the size of his forearm. His pale pink mouth hangs wide open, like a bear trap. His yellow and black striped tail curls in the crease of Kreminski’s elbow.

“She’s probably in the zoo,” he said. “Would you guys like to touch him?”

On a breezy, overcast Thursday morning, Kreminski and his baby alligator held four children captive beneath the pavilion at Night Heron Park.

For finishing a successful year in Reading Partners, a program that pairs local tutors with struggling readers, 11 fourth-graders from Angel Oak Elementary on Johns Island were re- warded with a trip to Kiawah Island.

Shortly before 9:30 a.m., they bounded off a small, white activities bus where a group of volunteers from the nonprofit Kiawah Cares Foundation greeted them. Kiawah Cares supports literacy programs, such as Reading Partners, in five schools on Johns and Wadmalaw islands.

“We focus primarily on the kids because education is so critical to lifting them out of poverty,” said Tammy McAdory, communications and outreach director for Kiawah Cares.

“A lot of them don’t get to leave Johns Island — ever.”

Back under the pavilion, the baby alligator snaps suddenly at Kreminski, nearly biting him in the arm, eliciting gasps from the fourth-graders and adult volunteers.

But the kids aren’t swayed. They glide their hands along his scaly spine and smooth tummy.

His back, fourth-grader Sydnee Lumley later remarks, feels rough, like “rocks.” But his sides, she observes, are “squishy.”

The Angel Oak kids in Reading Partners started the school year reading 2½ to 1½ years behind grade level. Now, said site coordinator Natalie Batten, most of them have met their goals.

This is his first year in Reading Partners, and he said he’s since learned “a lot” about science thanks to the time he’s spent reading with his tutor.

His favorite part of Thursday’s trip was getting to know the local wildlife.

“I really like animals,” he said. “I want to learn about them so I can help them.”