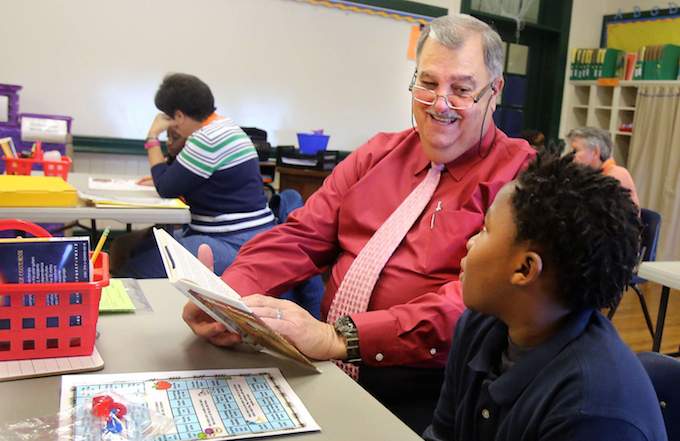 On a recent Tuesday morning, Eddie Driggers sits at a desk in a classroom on the second floor of Chicora Elementary. His hands are folded in front of him. His reading glasses are perched on the tip of his nose. His gun is tucked inside a holster on his right hip.

North Charleston’s chief of police is nervous. He’s not sure why.

“I’m good with kids. I love kids to death. I’m a big kid at heart, anyhow, and that helps,” says Driggers, a 40-year law enforcement veteran and grandfather of two. “And maybe that’s why I’m nervous.”

It’s Driggers’ first day volunteering for Reading Partners, a national nonprofit that pairs local tutors with struggling readers using an evidence-based, progressive curriculum to increase reading proficiency. Together, he and his new partner will spend an hour every week working on literacy skills like sight-word reading and vocabulary building.

Volunteers for Reading Partners, like Driggers, have been working in Charleston County schools since 2013, when the program merged with Book Buddies, a homegrown effort aimed at improving literacy at high-poverty schools. In that time, Reading Partners has helped nearly 700 children improve their reading in 16 Title I elementary schools across Charleston, Florence and Berkeley counties.

This year, Reading Partners wants to serve 675 students, but the group is still about 230 volunteers short.

“We don’t have the volunteers to come in, so the gap is getting wider,” says Cierra Rogers, a site coordinator for Reading Partners at Chicora. “I have 21 kindergartners who don’t know all of the alphabet. We’re starting off at the basics.”

Poverty and low literacy typically go hand in hand. At Chicora, where more than 95 percent of students qualify for social services, reading presents a challenge. Last year, less than 5 percent of Chicora’s fourth- and fifth-graders met or exceeded the “readiness benchmark” in reading on their standardized ACT exam.

“If a child isn’t reading proficiently by third grade, there’s an 88 percent chance they will not catch up,” says Kecia Greenho, executive director of Reading Partners South Carolina. “It’s really why we’re involved because it’s so key that we intervene in those early elementary years.”

Rogers has identified 60 students at Chicora who meet the program’s criteria, reading one month to two-and-half years behind grade level. So far, only 41 students are enrolled.

Driggers says he hopes his example will encourage others, particularly in law enforcement, to volunteer for the program. Part of modern policing is “building relationships,” he says, especially with young people. Nine North Charleston school resource officers already have signed-up as tutors.

“This is proof, not only can I get to know somebody and build relationships with them, but we can do it through reading,” Driggers says. “What more powerful statement can that be?”

They walk to the front of the classroom where Nicholas thumbs through a crate full of picture books. He picks out “The Golden Goose” by Dick King-Smith. Driggers starts reading aloud at chapter one, with Farmer Skint at Woebegone Farm. On page seven, the poor farmer finds a pleasant surprise in his goose’s nest: a golden egg. Driggers chuckles.

“If you find one, would you call me?” he says. Nicholas grins and nods. “Good!”