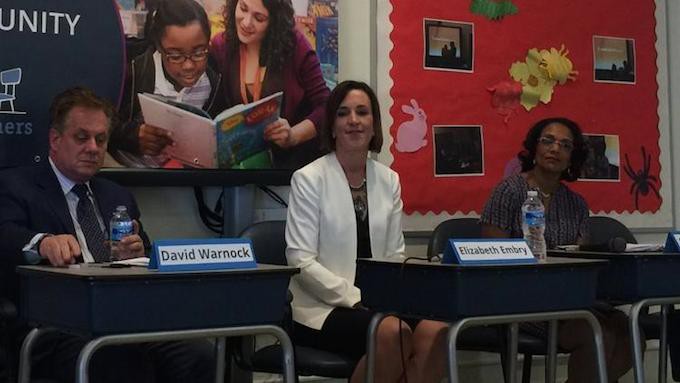 This article originally appeared in The Baltimore Sun

Three mayoral candidates said they would continue an executive order from the current administration that allows city employees paid time off to tutor struggling readers in Baltimore city schools.

Candidates Sheila Dixon, Elizabeth Embry and David Warnock made the pledge to a group of tutors who gathered at Cherry Hill Elementary/Middle School for a mayoral forum held by the non-profit organization Reading Partners.

The organization has partnered with the city for four years to boost literacy rates among city students, and is connecting more than 1,000 tutors with nearly 800 students in 14 schools across the city.

The candidates said they were committed to maintaining an executive order that has permitted more than 100 city employees to spend 2 paid work hours per week tutoring students.

Dixon said she would not only keep the order, but create an office of volunteerism to better organize efforts. Embry said she would also retain the order and that city government should be a “clearinghouse for programs that work and are effective.” Warnock said he would try to expand the volunteer base to the faith-based community.

The executive order was issued by Mayor Stephanie Rawlings-Blake in 2013 as part of a “Third-Grade Reads Initiative.”

The city’s initiative was part of a national effort to have children reading on grade level by third grade, which is considered an academic crossroads for the trajectory of a student.

Candidates said the order would be among various reforms they would seek to improve the academic outcomes among city students whose literacy rates are the worst they’ve been in years.

“We think the executive order shows a commitment to service, and the service is critically important to literacy in Baltimore City,” said David Lujan, executive director of public policy for Reading Partners.

The candidates also reiterated key points of their education campaigns. Dixon stressed that the city needed to get back to the fundamentals, teaching reading, writing arithmetic and having a coherent curriculum.

Warnock championed increasing the number of community schools that can provide wraparound services for children and their families so that students can take full advantage of educational and training programs available to them.

Embry gave a ringing endorsement of the national “Say Yes” campaign that the city is considering applying for, which would ensure every Baltimore city graduate could go to a college for free.

Theresa Davis, a retired educator who became a Reading Partner volunteer to a third-grader this school year said she believed that Warnock and Dixon had the best approach to help her student, a bright girl who can verbalize more vocabulary words than she can read on paper.

“The fact that they talked about fundamentals … and a number of avenues of success was important,” she said. “College isn’t the only goal for the bright and underserved.”