Reauthorizing the Elementary and Secondary Education Act: How to Break Through Congressional Gridlock?

Nearly 50 years ago the 89th Congress passed the landmark Elementary and Secondary Education Act (ESEA) of 1965. This legislation marked a significant investment at the federal level, specifically targeted to help lift children out of poverty by making high-quality education accessible to all. Since President Lyndon B. Johnson signed the ESEA into law in 1965, each reauthorization has sought to enhance the law’s effectiveness while staying true to its original mission—to improve educational outcomes for disadvantaged children.

The last reauthorization of the ESEA, enacted in 2001 and familiarly known as No Child Left Behind (NCLB), focuses on holding states accountable for low-performing schools and increasing assessment requirements to ensure students are progressing academically. While most agree that the intention of the law is admirable, schools and districts have struggled under prescriptive testing mandates and significant funding constraints.

A Post-No Child Left Behind World 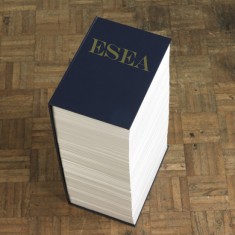 NCLB expired in 2007, and for the last 6 years Congress has struggled to come to agreement on a reauthorization of the ESEA. Over the years there have been three or four significant bipartisan rewrites and innumerable debates, hearings, and committee meetings, all unyielding. As a result, in 2010 the Obama Administration issued federal waivers to provide relief and flexibility from the more onerous requirements of current law. While this unprecedented use of administrative authority has been welcomed by most states, it is a poor substitute for a comprehensive reauthorization of the law.

In contrast, the House Education and Workforce Committee, led by Minnesota Republican John Kline, passed a bill to significantly reduce the federal role in education. The bill focuses on consolidating and reducing the number and scope of authorized programs while giving maximum flexibility to states. The bill also removes most accountability requirements for states regarding student achievement and low-performing schools. Just before the August recess, the bill passed through the House along party lines.

In sentiment and policy the bills could not be more divergent. EdWeek, a DC-based education journal, provides a detailed comparison underscoring the lengths separating the two parties on education policy.

For Washington insiders, these latest efforts represent one more example of how politically entrenched our federal policymakers have become. At this point, there is no clear pathway for the two sides to come together to enact any education legislation, much less a comprehensive student-centered bill that would provide needed guidance and resources for our highest-need communities. For those of us working in schools, this political gridlock is unacceptable.

Lawmakers are at home this month visiting with constituents in their districts and setting forth new platforms for the next congressional session. They will be hosting town halls and publicity events. We encourage you to engage with your members of Congress. Ask them how they intend to support our students. Ask them to please put politics aside, work together to do their jobs, and pass a law that will support the needs of our students.