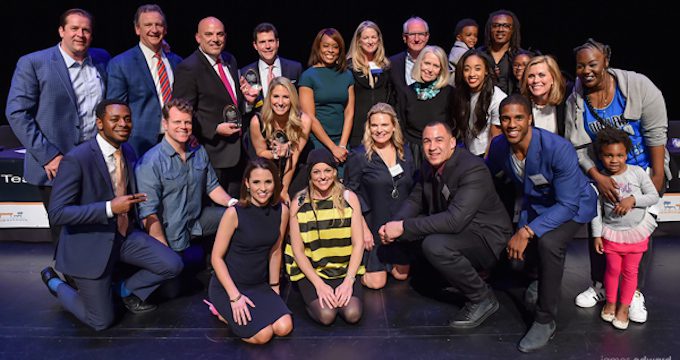 For some, auto-spell check has relieved some of the angst of getting words spelled correctly. But a group of area hotshots, they found themselves relying on their own gray matter to compete in the Reading Partners Spelling Bee on Wednesday, March 1, at City Performance Hall benefiting Reading Partners North Texas. Here’s a report from the field:

What do Don Quixote, Pharrell Williams and Hermione Granger all have in common? Their names were each spelled (not necessarily correctly) by local celebrities at the 5th Annual Reading Partners Celebrity Spelling Bee on Wednesday, March 1, at City Performance Hall. Following a cocktail reception, Co-Chairs Jenny and Loren Koziol kicked off the evening with powerful statistics about the current state of child literacy in North Texas before introducing emcees Katy Blakey and Kristi Nelson of NBC 5. Byron Sanders, Vice President of U.S. Trust, assumed his position as Official Spelling Bee Judge on stage shortly after. Then, one by one, the five teams entered the stage with hopes of being crowned spelling champions by the end of the competition. Each sponsored by a company or individual, the teams were divided as follows:

Just before the competition kicked off, Dallas Cowboy Byron Jones joined Team Neiman Marcus from the crowd as a surprise last-minute addition. The spelling bee then began with one practice round, but not before each team purchased passes for $1,000 each to be used in case they got stumped. Words were pulled from one of multiple categories, such as pop culture, literature or geography. After six or seven rounds—and all passes used on difficult words—a winning team rose to the top. When Team U.S. Trust misspelled the word ‘bourgeoisie,’ Team EY became the 2017 Reading Partners Celebrity Spelling Bee Champions. After posing for a photo with their trophies, the winning team joined their defeated opponents to mingle with guests across the street at Jorge’s during the after party.