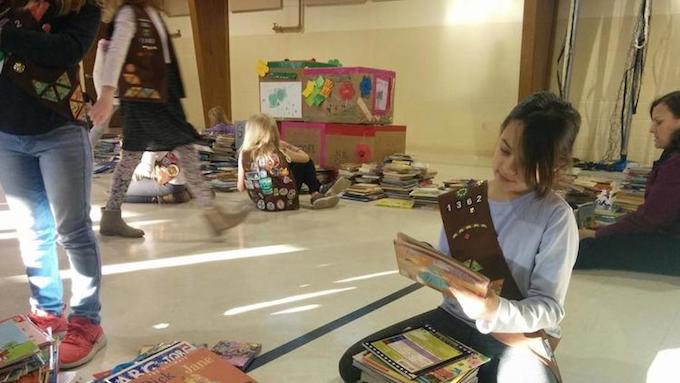 Originally published by The Baltimore Sun.
By Erika Butler

A handful of Brownies from Girl Scout Troop 1362 delivered 2,500 books Friday to schools in Baltimore, more than half of the books they collecting during a drive earlier this year.

The other 2,000 books collected have already been distributed to eight Title I schools in Harford County.

The girls in the troop, which meets at First Presbyterian Church in Bel Air, chose to do a book drive for their service project this year. The books were distributed Friday through Reading Partners Baltimore, a volunteer-based program that provides one-on-one literacy instruction to elementary school students reading below grade level in 19 Title I schools across the city.

“The theme was Share your Story, so we voted on ideas, and some people thought of a book drive and we could share our stories,” troop member Sabine Schofield said.

With 4,522 books collected, the girls far surpassed their initial goal of 300 books.

“They exceeded our wildest expectations,” troop co-leader Amanda Forr said. “Our original goal was 300 books, and we had that within the first couple of days of the book drive.”

Once they decided to host a book drive, the girls sent letters to their principals.

At Prospect Mill Elementary, where 8-year-old Maureen McMennamin is in third-grade, Principal Benjamin Richardson was so excited about the project he asked Maureen and classmate Grace Boseck to speak directly to her classmates at a school assembly.

“I told the school about what we were doing and who we were donated to,” Maureen said.

The girls decorated a box and put it in the school lobby and called their drive “Share a story, donate a book.”

At their school alone, 1,303 books were donated.

“I was just really amazed how many we raised,” Maureen said.

Sabine, a third-grader. said her classmates at Hickory Elementary brought in new or gently used books. She was expecting about 250 donations.

She was surprised to get 967 books.

“I was thinking, ‘Wow, I got so many books when I was a person by myself,'” Sabine said. “I would have to say thank you to everyone who donated.”

“We knew lots of people [at our school] had books and there were kids who didn’t have any books and were reading below grade level and it is important to practice reading,” Maureen said.

“I’m wondering how the kids will like their books,” she said.

She and her troop-mates are pleased with the results of their book drive.

“I feel happy because it will affect other people and their lives and not just us,” Sabine said.

Maureen said she’s excited to deliver the books this afternoon “because I think it’s going to be cool to bring them and people are going to be really happy,” Maureen said.

The whole project has been eye-opening for Forr as a leader.

“Together, the troop chose to do a book drive for our service project for the year, and we knew the girls would be successful. This is a group of driven, generous girls. Many of them have been in this troop since kindergarten, and they really bring out the best in each other,” she said.

Forr attributes the troop’s success to the ways the various schools and the church allowed the girls to exercise leadership.

“From speaking at assemblies to doing the morning announcements to making advertising materials, these girls did it all. When we sorted the 4,500 books during our meeting and the girls realized just how successful they were when their efforts were combined, it was really inspirational to all of us.” Forr said. “I know the girls are really proud of what they’ve accomplished and how their efforts will benefit others, which is exactly what we hoped for.”