North Texans Embrace MLK Day Of Service: Focusing On 'The We' Instead of 'The Me' 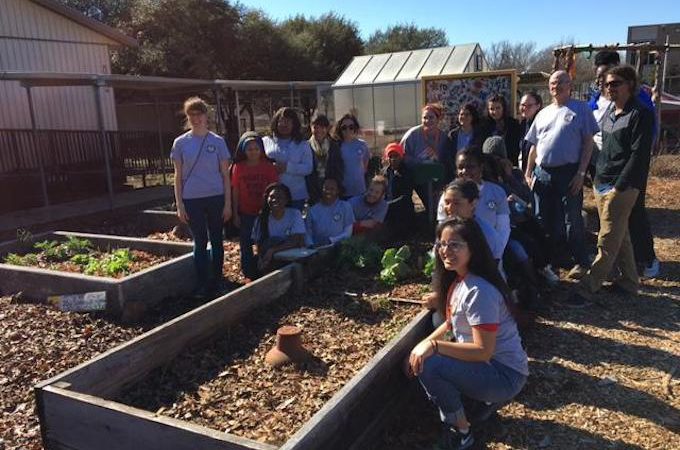 In 1994, Congress designated the federal holiday honoring Martin Luther King Jr. as a national day of service. Ever since, service-minded people have embraced the challenge to make the third Monday in January a day on, not a day off.

A few dozen volunteers in east Dallas spent half the day knee deep in dirt and mulch— to help a small school garden become something much bigger.

A New And Improved Garden

The kids at Bayles Elementary are hardly going to recognize their school garden on the other side the of the holiday weekend. It’s now a third larger– and there’s a lot more taking root.

“We’ve replanted some cool weather vegetables, beets, carrots, cabbage, some cilantro,” says Elizabeth Dry, founding director of the Promise of Peace Community Gardens. “And we also amended the soil and put new mulch down on top of the soil. So, we’re really going to explore this year, how much can you grow on three square feet?”

Promise of Peace Community Gardens is the group behind this one at Bayles.

“Our mission is to turn vacant, underutilized spaces into thriving places where we grow food and teach people how to cook that food, look at food differently and then make contributions to their community,” says Dry.

Serving A School And Its Families

That’s what the garden at Bayles is all about. Parents of students get cooking classes, they volunteer in the garden and the families get 10 pounds of locally-sourced produce to take home each month.

“The garden is the heart of the community, so when you bring people together in the garden, they start seeing nature differently, they see themselves differently and they see the world differently,” Dry says.

This MLK Day, two dozen Americorps members came to Bayles to make that difference. Americorps is a national organization that gives people a chance to work in service for a year. Members aren’t paid a salary, but are given a living allowance.

Denise Flores, 23, has been a member of Americorps since August—she says devoting part of her life to service has been more than memorable.

This group of service-day gardeners usually works with the North Texas literacy program ‘Reading Partners.’ Flores says spending the day in a garden built to fight hunger changes how she thinks about the kids she serves during the week.

“I feel like this just gives us another perspective on the lives of the students that we do work with on a regular day,” says Flores. “It helps us realize that they also have other struggles in their lives before we ever see them in our reading centers.”

And while replanting and expanding a school garden may seem like a small project, Lisa Phillips says, it’s a good one. She’s senior program manager at ‘Reading Partners.’

“I’m a real believer in digging in the dirt! laughs Phillips. “Watching them all come together and work and be a team is really really inspiring.”

And it was obvious the Americorps group left feeling inspired. After the planting and raking was done, they took some time to talk about what the day meant to them.

“This allowed our members an opportunity to do some self-reflection,” Phillips says. And I think allowed them to really focus on the bigger picture, not so much ‘the me’. It allowed them to look at ‘the we.’”

And what’s more ‘We’ than volunteers working together on a federal holiday to mulch and plant spinach? Maybe the idea of a small school garden providing low income families with the tools to live happier, healthier lives.