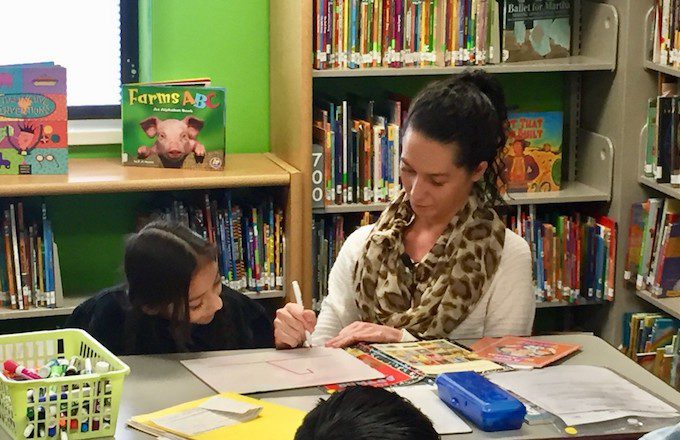 There is magic happening inside Denver’s College View Elementary School.

“Even if someone says ‘No you can’t,’ prove them wrong,” Wright said.

Wright is a volunteer with reading partners. She and her fellow tutors are helping teach special low-income students how to read.

“I’m giving these kids knowledge to go and use in the future,” she said. “That’s so rewarding.”

In 2016, she and her boyfriend were hit by a truck while driving over Kenosha Pass in a snowstorm. Wright was internally decapitated and given a 1 percent chance of survival. After four months in a coma, she woke up.

After learning her prognosis, Wright said she was determined to prove her doctors wrong.

But relearn she did.

In February, Denver7 was there as Wright hit the slopes at Breckenridge.

She said she realized she had been given a second chance.

“After I woke up from a coma, everything revolved around me,” she said. “I started feeling uncomfortable. I was like, ‘I have to give back.'”

In April, Wright started giving back by volunteering with Reading Partners, and tutored three students a week for 45 minutes.

One day, a previously silent student read a paragraph out loud.

“Did I just teach him that? A light bulb went off. I liked that,” Wright said, laughing.

She said she gets as much from the sessions as the kids.

“Reading Partners has been so great,” she said.

It has given me a new sense of independence and purpose. I feel my purpose is to help kids.

Her students said they are grateful.

Reading Partners has seen the change as well.

“Seeing the way she engages with her students and supports them is pretty incredible,” said Reading Partners Executive Director Margie Thirlby.

And now this woman who has already defied the odds is inspiring everyone around her and looking to the future with hope.

“I feel really empowered, almost like the sky’s the limit,” she said. “I don’t want to waste this chance that I have. I’m going to make the most of it.”

Thousands of K-5 students in Colorado are not reading at grade level. Reading Partners Colorado aims to match 1,000 volunteers with 700 struggling readers. They’re always looking for volunteers. To become a volunteer visit www.readingpartners.org/volunteer .