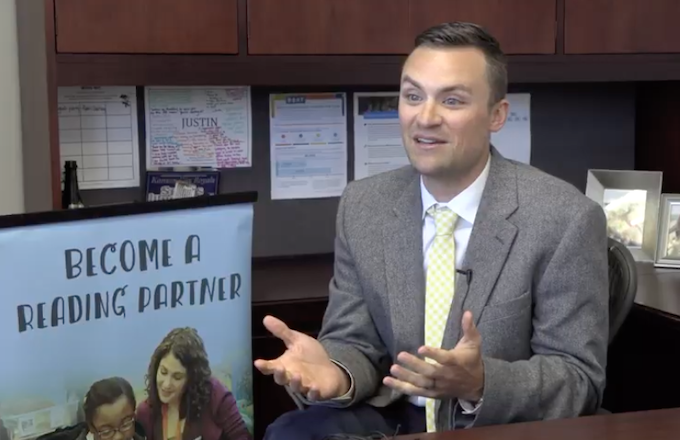 Originally published by The University of Tulsa

TU alumnus Justin Harlan has made it his goal to make a difference in the Tulsa community.

Harlan received both his Bachelor of Science in Business Administration and Masters of Business Administration degrees from The University of Tulsa, then went on to work for Teach for America during its Tulsa launch in 2009. After seven years – plus a year helping found Collegiate Hall – he settled at Reading Partners Tulsa as the organization’s executive director.

Reading Partners is a nonprofit dedicated to helping young students become confident readers. In fourth grade, students are expected to transition from learning to read to reading to learn, and many students get left behind. Volunteers work one-on-one with these students to help them catch up.

Looking back at his decision to come to TU, Harlan called it a “no-brainer.” “When I came to the campus, I just knew that it was the place for me,” he said.

Harlan loved the combination of the small campus and small class sizes along with the big city benefits.

It’s really the best of both worlds.

But it wasn’t just his experiences in class that made him love TU. Harlan was active on campus as a part of a fraternity as well as being student body president. When looking back, Harlan attributes his experiences outside the classroom to shaping where he is today.

Like many students, Harlan came to college not quite knowing what to do; but the summer before his senior year, he found his calling while working for a missions organization, building houses and mentoring kids, in Jamaica.

Harlan described visiting a family there and being moved when the parents asked him which of their five kids they should send to college because they could only afford to send one. “I remember thinking that people shouldn’t have to make that decision,” said Harlan. “It was really in that moment that I realized that everything in my life was about to change.”

Harlan has been drawn to nonprofit work ever since, and especially the business side of nonprofits.

Experience at Teach for America

Harlan initially got interested in Teach for America through the Teacher Corps and applied for a teaching position in Kansas City. He was placed in Kansas City but ultimately rejected the offer because he was dating a girl from Tulsa (they are now married and Harlan smiles as he recalls that it was a good decision).

Just a couple of months later, Teach for America opened a region in Tulsa and Harlan had the opportunity to work as part of the operations team within the organization. “It was neat to be able to still impact the mission of Teach for America — which I

cared a lot about — in a way that was outside of the classroom. I attribute some of the things I learned at TU to the problem that I really was trying to solve, which is how to ensure that every kid in Tulsa is getting the education that they deserve regardless of socioeconomic status.”

Through Teach for America, Harlan was able to figure out and focus on what he really wanted to do. There, he found a love for entrepreneurism and startup work. “There’s this really unique nature of being in a place that’s just getting going, where there’s a lot of energy and there’s really not a bad idea,” he said.

He enjoyed working with the small team because he got to try out everything and wear many hats. It helped him figure out what he likes most.

Moving into the role of executive director at Reading Partners

Harlan considers joining Reading Partners as a homecoming since many of the community members were the same people who helped start the Tulsa chapter of Teach for America.

Harlan felt comfortable in his position, and he noted that one reason he loves the organization so much is because of how much it’s driven by the community.

Our mission lives and dies by how many people help us out.

Fortunately, Tulsa has stepped up to the task.

Across the country, there are 13 other Reading Partners regions, including those in Los Angeles and New York, but Tulsa has the largest one. “I think that captures the essence of Tulsa perfectly because it really is a community that will wrap its arms around a problem,” said Harlan.

Harlan found great success in Tulsa and attributes much of this success to his experiences at TU. “There’s obviously a very high-quality education and professors and there’s nothing short of great things happening in the classrooms. Then, it’s also really easy to apply the things that you’re learning in the classroom to other organizations.”

Harlan’s advice for current and prospective students? “You don’t have to know everything to get started. If you have any sort of inkling, just give it a try and the worst that could happen is you realize that it isn’t for you, and you just go back and try something else. Eventually you’re going to figure out something that you like and enjoy.”