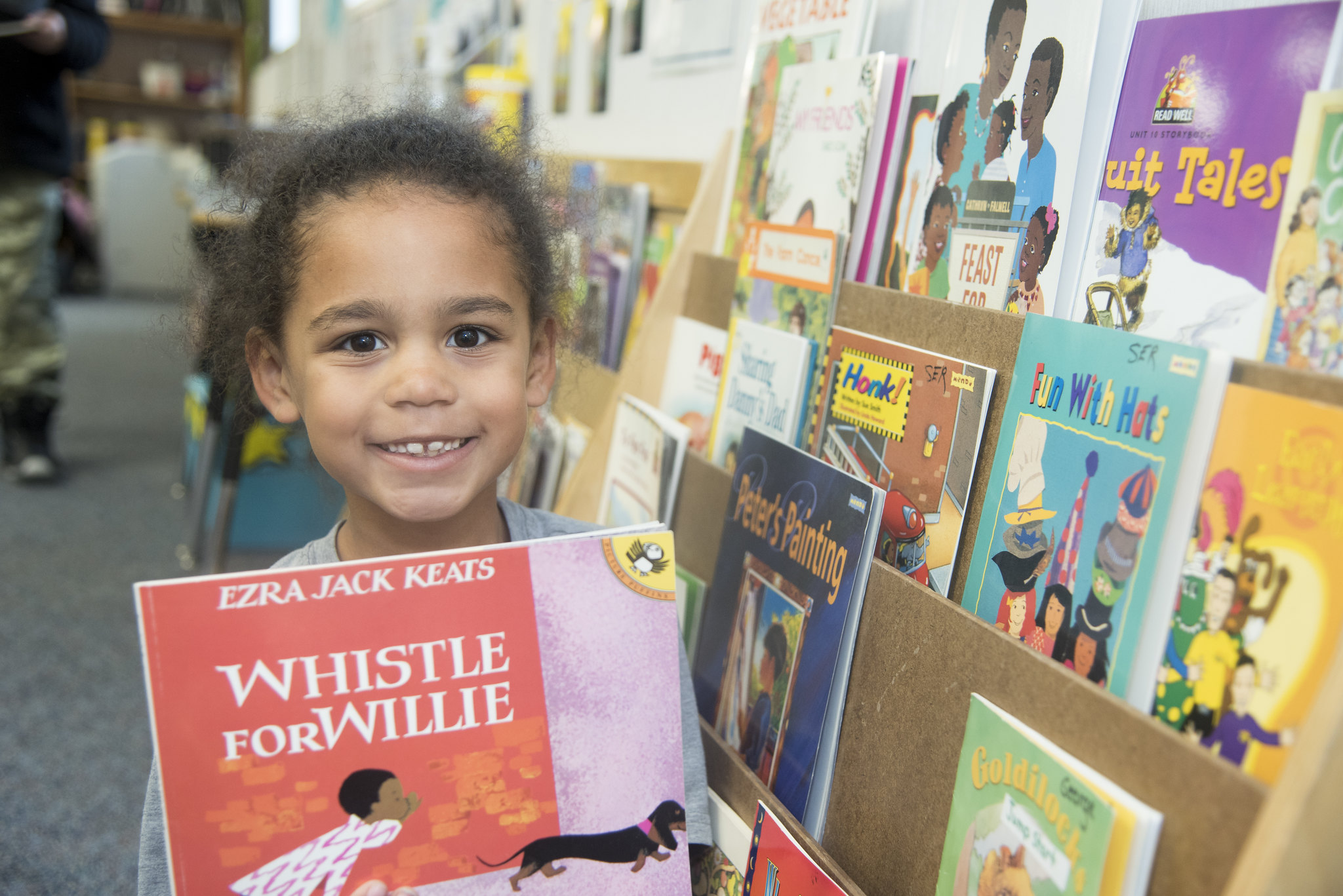 Oakland, CA, Feb. 01, 2021 (GLOBE NEWSWIRE) — Reading Partners, an early literacy nonprofit dedicated to mobilizing community volunteers to tutor students attending under-resourced schools, believes that diversity should be celebrated not only in designated months but throughout the year. As it celebrates Black History Month, Reading Partners encourages families to instill the important message that Black heritage and history can and should be appreciated every month. Unfortunately, only a small percentage of books centered on non-white characters are written by authors with a shared identity. For example, only 29 percent of the 340 books featuring “significant African or African American content/characters” in 2017 were written by Black authors and/or illustrators. It is in the spirit of expanding exposure to diversity in literature that Reading Partners curated a full calendar year of books honoring Black history by BIPOC (Black, Indigenous and people of color) authors and/or illustrators who share the identity of the central characters in their books.

Reading Partners’ new CEO, Adeola Whitney, is a Nigerian American woman with three school-aged sons who recognizes the empowerment that comes with representation in children’s literature.

“One of the primary reasons I joined Reading Partners is because the organization strives to help students overcome systemic inequities while fighting for reading as a fundamental right for students of all backgrounds. When students see themselves reflected in the books they read, it not only strengthens their affinity for reading but it can also impact them in ways that are both inspiring and validating.”

Introducing the “Black History Month is Every Month” Book List

Reading Partners challenges parents to read one of these books every month with their children to create a year-round dialogue celebrating diversity. 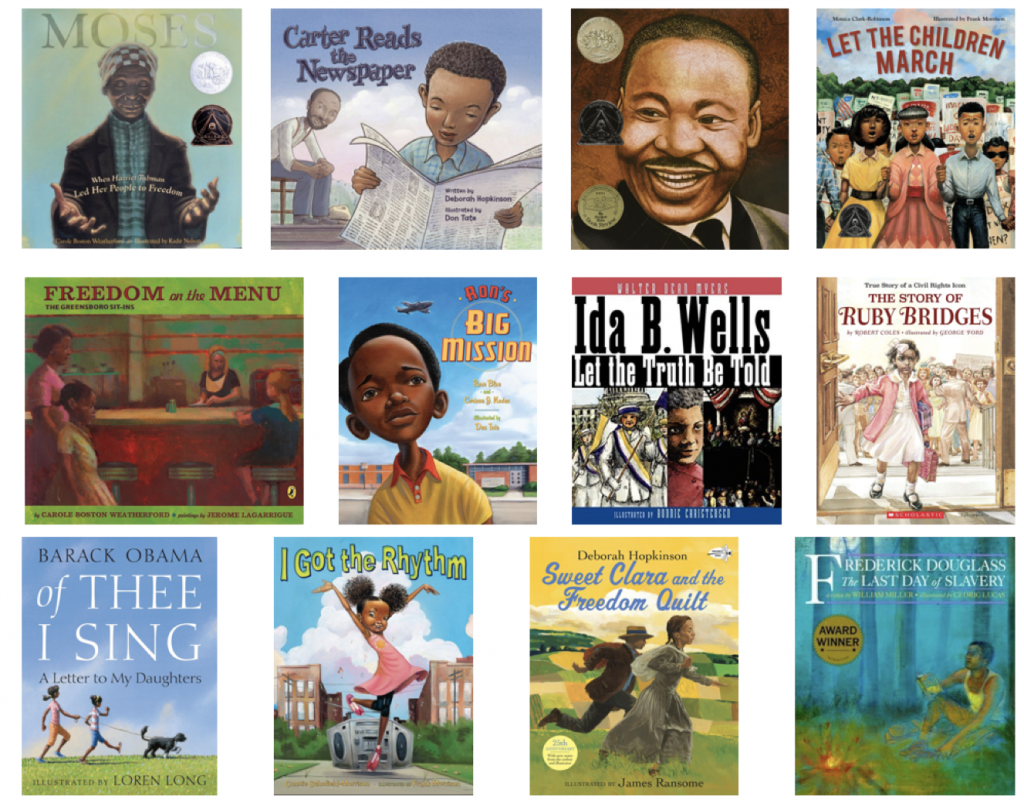 January: Moses: When Harriet Tubman Led Her People to Freedom by Carole Boston Weatherford: Introduce children to Harriet Tubman, the champion of the Underground Railroad who earned the nickname “Moses” for leading hundreds of slaves to freedom. Spirited text and paintings portray how Tubman’s compassion, courage, and deep religious faith helped her lead 19 trips from the south to the north in order to help fellow African-Americans.

February: Carter Reads the Newspaper by Deborah Hopkinson: “Carter G. Woodson didn’t just read history. He changed it.” As the father of Black History Month, he spent his life introducing others to the history of his people.

March: Martin’s Big Words by Doreen Rappaport: This picture book biography of Dr. Martin Luther King, Jr. brings his life and the profound nature of his message to young children through his own words. Martin Luther King, Jr., was one of the most influential and gifted speakers of all time. Doreen Rappaport uses quotes from some of his most beloved speeches to tell the story of his life and his work in a simple, direct way.

April: Let the Children March by Monica Clark-Robinson: The book is written from the point of view of a young African American girl growing up in Birmingham, Alabama. Her family hears Martin Luther King Jr. call for peaceful protest. After her parents express fear, the girl and her brother decide they will march instead. Dr. King expresses concern but allows the children to organize.

May: Ida B. Wells: Let the Truth Be Told by Walter Dean Myers: Ida Wells was a leader for African American women to be an equal part of the fight for women to win the right to vote.  Ms. Wells was participating in and leading peaceful non-violent protest years before the Civil Rights Movement formally began. She worked closely with Alice Paul and Lucy Barns as a member of the National Women’s Party.

June: Ron’s Big Mission by Rose Blue and Corinne J. Naden: One summer day in 1959, nine-year-old Ron McNair, who dreams of becoming a pilot, walks into the Lake City, South Carolina, public library and insists on checking out some books, despite the rule that only white people can have library cards.

July: The Story of Ruby Bridges By Robert Coles: When a judge orders Ruby to attend first grade at William Frantz Elementary, an all-white school, Ruby must face angry mobs of parents who refuse to send their children to school with her.

August: Frederick Douglass: The Last Days of Slavery by William Miller: A beautifully written story that looks into the early life of abolitionist Frederick Douglass. The reader understands his life as a slave, his passion for reading to escape his circumstances, and the path that led him to be a hero to many.

September: Freedom on the Menu: The Greensboro Sit-ins by Carole Boston Weatherford: When four courageous black teens sat down at a lunch counter in the segregated South of 1960, the reverberations were felt both far beyond and close to home. This insightful story offers a child’s-eye view of this seminal event in the American Civil Rights Movement.

October: Of Thee I Sing: A Letter to My Daughters by Barack Obama In this poignant letter to his daughters, Barack Obama has written a moving tribute to thirteen groundbreaking Americans and the ideals that have shaped our nation. From the artistry of Georgia O’Keeffe, to the courage of Jackie Robinson, to the patriotism of George Washington, Obama sees the traits of these heroes within his own children, and within all of America’s children.

November: I Got the Rhythm by Connie Schofield-Morrison and Frank Morrison On a simple trip to the park, the joy of music overtakes a mother and daughter. The little girl hears a rhythm coming from the world around her — from butterflies, to street performers, to ice cream sellers everything is musical! She sniffs, snaps, and shakes her way into the heart of the beat, finally busting out in an impromptu dance, which all the kids join in on!

December: Sweet Clara and the Freedom Quilt by Deborah Hopkinson: Clara was born as a slave and is known as a talented seamstress. After years in slavery, she hears for the first time of the Underground Railroad and makes it her mission to find a way to freedom to see her mother. She designs a quilt that doubles as her map to freedom and a new life.

For over 20 years, Reading Partners has empowered students to succeed in reading and in life by engaging community volunteers to provide one-on-one tutoring. Since its founding, the national nonprofit organization has mobilized nearly 70,000 community volunteers to provide proven, individualized literacy tutoring to more than 65,000 elementary school students in nearly 450 under-resourced schools across ten states and the District of Columbia. Visit readingpartners.org to learn more about our program impact, or connect with us on Facebook, LinkedIn, Twitter, and Instagram.