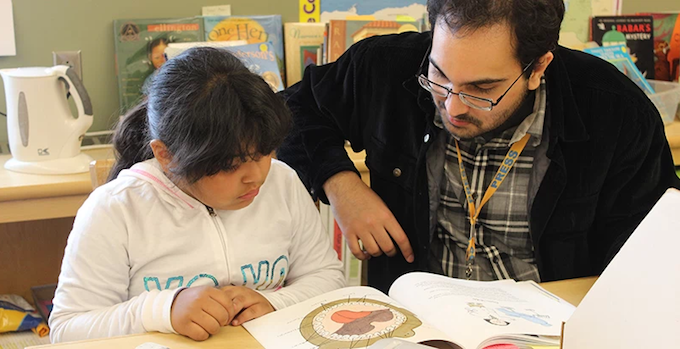 Originally published by The 74.
By Kate Stringer

A squirrel, a cat, and a duck walk into a kitchen in the middle of the woods. The animals are about to make the best pumpkin soup you’ve ever tasted, and each has a special job to do.

That’s what reading tutor Toni Gray-Hazelwood tells the elementary student learner leaning over her arm as she flips through the book Pumpkin Soup, by Helen Cooper. It’s a cloudy Wednesday morning, and the pair sit at a wooden table in the colorful library at PS 48 William Wordsworth School in Jamaica, New York.

Back in the woods, the duck tires of doing his special job: putting salt in the soup. But when he abandons his task, the soup quickly becomes inedible and chaos reigns in the little house. “Do you have your own job to do at home?” Gray-Hazelwood asks her student.

The student smiles shyly and twirls her ponytail. “I tell my family to clean sometimes,” she says.

Pumpkin Soup is a children’s story about working together to achieve a common goal — and has powerful parallels in this quiet reading session. Gray-Hazelwood is one of over 14,000 volunteer tutors who pitch in to achieve a common goal — childhood literacy — through Reading Partners, a national nonprofit that provides one-on-one tutoring for schools with large populations of economically disadvantaged students. Founded in 1999, the program serves over 11,000 students in 10 states and Washington, D.C., and has been proven effective at improving reading.

“The reality is educators in schools cannot do it alone,” said Reading Partners CEO Karine Apollon, whose program brings in community tutors like retirees who otherwise would have no reason to set foot in a public school.

But Reading Partners is now under threat, one of several education programs that would be hit hard under a Trump administration proposal to eliminate the Corporation for National and Community Service, which this year has a $1 billion budget. The independent agency funds AmeriCorps and Senior Corps, programs that serve faith-based organizations and nonprofits like Reading Partners.

Though Congress spared the CNCS through September (the rest of Fiscal Year 2017), no one is certain what will happen during Fiscal Year 2018 budget talks.

“I am very relieved that we can plan for next year’s AmeriCorps cohort,” Jennifer Harwood, executive director of national and community service at Reading Partners, wrote in an email. “What is not clear is the FY18 and beyond budget, which is the biggest hurdle, since it still proposes an elimination of CNCS entirely — and that keeps me up at night!”

Some 350 AmeriCorps employees form the backbone of Reading Partners, recruiting and maintaining the thousands of volunteers who make the program happen. They earn $15,000 to $24,000 a year, depending on location, paid for with a combination of $5 million from AmeriCorps and funds raised by Reading Partners itself. If the CNCS were eliminated, Reading Partners would have to raise around $12 million to make up the difference, Harwood said.

“There is no way we could operate with a 30 percent cut to our budget, having to raise that additional money,” she said. “It would devastate us. I can’t even think of a better word.”

AmeriCorps funding has been threatened before, Harwood said, but this year feels different because of the unpredictability of the current administration. Growth plans for the 18-year-old program, which currently operates in 14 metropolitan areas, is on hold while the nonprofit waits to see what happens, Apollon said. 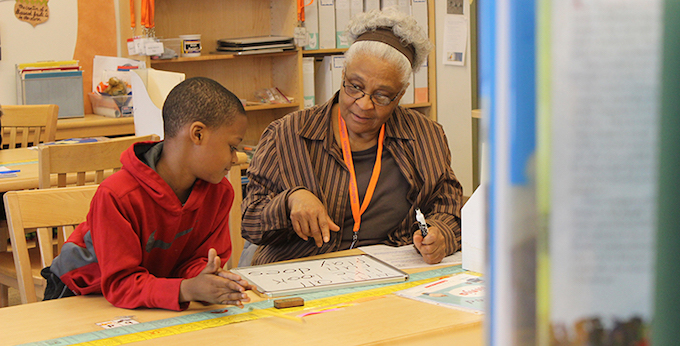 ON THE FRONT LINES

Working with Gray-Hazelwood at PS 48 is Kaitlin Cuskey. Her title is site coordinator, but somehow Master Tutor seems more appropriate.

Cuskey does just about everything at the school to keep Reading Partners going: fetching students from their classes, managing tutoring schedules, giving tutors advice, encouraging students to focus on their reading when they’d rather be elsewhere, tutoring four to five students of her own each day, and tracking down teachers during their lunch breaks to update them on the kids’ progress.

Sitting at one of the library tables, surrounded by books and curriculums, Cuskey speaks in a soft voice and keeps her eyes fixed on the kids. She describes her job as cheerleader for her learners and volunteers, swooping in when motivation drops and the students and tutors get tired.

Sure enough, two hours later, Cuskey is kneeling on the floor next to a tutor and learner, and she counts out loud the number of words the student read in a minute. “…77, 78, 79, 80, 81,” she looks up at the student, who buries half of his face in his sweatshirt as though trying not to smile. “81 words, that’s amazing. C’mon, you know that’s amazing,” she says. The boy nods his head, and a grin breaks through.

Only 20 percent of the nation’s low-income fourth-graders were reading at grade level in 2013, while nearly half of their wealthier peers were, according to The Annie E. Casey Foundation. But Reading Partners has been shown to improve literacy in low-income elementary students: in fluency, reading comprehension, and sight word efficacy. This 2015 MDRC research, which looked at 1,200 students in 19 schools, found that Reading Partners was a low-cost option for schools, which pay for 20 percent of the cost, or $710 per student, as compared to other literacy programs that cost $1,700 per pupil.

Is it really that simple? That was PS 48 Principal Pat Mitchell’s reaction five years ago when she first visited a Reading Partners location in Queens to observe the program. Even though the nonprofit didn’t have expansion plans, Mitchell persuaded them to come to her school.

Reading proficiency jumped at Mitchell’s school, from 25 percent in 2014 to 45 percent in 2016. “Scholars are growing by leaps and bounds just because they have an interested party who is with them consistently,” Mitchell said. “ I’m telling you: These are our rivals for valedictorian.” She said the results were particularly significant for her school’s English Language Learners.

It’s challenging work, because students who are identified by their teachers as most in need of reading support can come in with entrenched attitudes, believing that they’re poor readers. Annie Kessler, New York’s Reading Partners program director, recalled one student in East Harlem who would hide under the desk at first, but eventually he came out if she read him articles about snakes. Other students are so nervous about reading that they refuse to talk.

But slowly, students begin to build trust in their one-on-one tutor and feel more comfortable making mistakes in a way they wouldn’t in a room with 25 other students.

“I’ve seen students who are really nervous to read improve in confidence,” Cuskey said. “Some didn’t know the alphabet, and now they’re improving.”

Learners often develop good relationships with their Reading Partners tutors, who can be as young as 14. Several eighth-grade boys worked with second- and third-graders at a school on Manhattan’s Lower East Side. “It was so loud none of them had personal space,” Kessler said. “But the elementary students thought they were the coolest thing ever.”

The Reading Partners curriculum is designed so that anyone, regardless of experience, can be a tutor. Students meet their tutors during or after school twice a week for 45 minutes. Each session begins with 10 minutes of reading from a book the student selects. Tutors then go through worksheets with students, asking scripted questions that vary by grade level about main characters, inferences, or vocabulary words. After each session, tutors record student progress in a folder for the next tutor to look at. Students take reading assessments three times a year, and progress updates are sent home to parents.

“It’s important to have the community involved because…it provides a greater sense of importance and prevalence,” Cuskey said. “I’ve had students say, ‘I want to do what you do.’”

And some students return to give back to their school through Reading Partners. Kessler recalled meeting a 19-year-old who was signing up to be a Reading Partner volunteer in Queens. When she told him that his old elementary school in Brooklyn also participated in the program, he immediately switched locations, even though it meant a longer trip.

“For me, being an AmeriCorps member in New York — I was born and raised in the Bronx — so being with Reading Partners, I think there’s so much more passion for me and my role,” said Krystal Cabrera, a second-year VISTA Partnerships and alumni coordinator for Reading Partners. “What better way to get more involved in the community I used to live in?”

In other words, the more ducks to help make the pumpkin soup, the better.