Relinquishing power when we want control 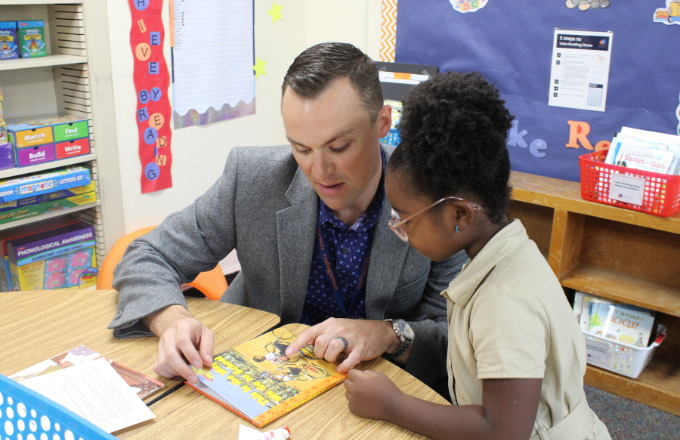 It has been 99 years since Black Wall Street was destroyed in Tulsa in one of the worst race massacres our country has ever experienced. While it is easy to celebrate the progress made since 1921, the past few weeks have made it clear that there is still an overwhelming amount of work to be done. But this shouldn’t be surprising. The anger being expressed across the country right now may have been sparked by the tragic murder of George Floyd, but that one horrific incident does not encompass what is a much broader issue. The issue we are facing as a country is systemic. It is institutional. It is personal. And we must each commit, at a personal level, to improving.

At Reading Partners, we know that reading is a life skill that unlocks potential, but we have to do more than just read. It’s our shared responsibility to equip the next generation with the skills and knowledge they need to build a system grounded in justice and equity. And if children are to depend on each of us as role models and educators, then we need to be better equipped ourselves.

In order for racial equity to be realized, those in power must acknowledge their power and be willing to relinquish it.

As a white male, it has been difficult to process the fact that I have power and privilege that I did not earn. As I grapple with this, I recognize this is a hard concept to come to terms with. We might be confronted with difficult questions, like, “Doesn’t everyone in a position of power work hard to get there?” “What will happen to what I’ve built if I relinquish some of my power?” “If those in power step back, won’t things go out of control?” Relinquishing power often comes with a fear of losing control which can be hard to overcome.

If I’m honest, I often feel mired in times like these when the problems feel so big, so systemic, so overwhelming. I find myself wondering: what difference can I make? I even question whether it is my place, or whether this is the right time to share a message on power when so many are grieving and fighting and processing the fact that power is being used against them in the worst of ways. I certainly don’t have all of the answers, but to those of us who identify as white and other people in organizational or societal positions of power, I would challenge each of us as leaders to relinquish power today by taking these tangible next steps:

Part of relinquishing power is acknowledging that we are not perfect. We often build up “leadership” as a role we take on because we make the least mistakes (or hide them well), or have the answers. But, we are all flawed. For real change to happen, we must be okay with that fact. We all have racial biases deeply rooted in us—engrained from an early age. If we can’t confront those, the socialization of oppression will continue.

Start by ordering a book or two and dive in. As an organization, we are starting with How to be an Anti-Racist by Ibram Kendi, So You Want to Talk about Race by Ijeoma Oluo, and White Fragility by Robin Diangelo.

Relinquishing power means accepting that you don’t always have the right answer, inviting new perspectives, and listening. Who is informing your decisions? Who are you consulting? Are you seeking advice from those who are different from you? If you are a nonprofit leader, ask yourself what most directly informs the service you provide? Is it what you think is best or what the people you are serving say they need?

Learning and listening is a good start but then we must act on the information we’ve accumulated. This is where it gets challenging because I often tell myself that my actions have to be perfect, in my own mind at least. Until I feel fully prepared to act, I hesitate to do so. And the reality is that I rarely feel fully prepared. But preparedness is not the end goal. The goal is real progress through building power within others. We must center the voices and perspectives of racially oppressed people so, collectively, we can act on disrupting a racist system.

The flames of the Tulsa Race Massacre 99 years ago were initially fueled by racial bias, prejudice, and hate. But they were fanned by a desire for power. Let’s make a commitment, together, to build power in others by choosing to learn, listen, and act today.