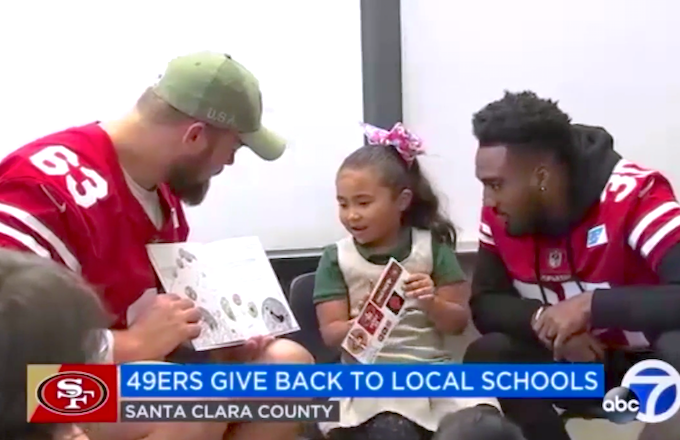 Originally published and broadcasted by ABC 7

But first, in honor of the upcoming Martin Luther King Junior holiday, members of the team spent Tuesday afternoon connecting with students at a South Bay elementary school.”Extremely important week, but this is also extremely important. Making sure the kids understand the importance of education, the importance of learning and having fun, and growing up the right way,” said San Francisco 49ers Offensive Lineman Ben Garland.

A faithful surprise for students at San Antonio Elementary School in San Jose.

“Both my sisters are teachers, so I just love promoting educational systems, and to be able to be a part of this community with the team being here, is just awesome,” said San Francisco 49ers Offensive Lineman Daniel Brunskill.

Some players read to a kindergarten class while others provided one-on-one tutoring lessons to students in other grades.

“There’s actually a literacy crisis in our country. Only 36 percent of students are reading at grade level by the end of third grade, and in underserved communities, it’s even worse,” said Aarika Riddle with Reading Partners.

Over at Cabrillo Middle School in Santa Clara, Principal Stan Garber knows firsthand how meaningful it can be to receive support from the 49ers.

“Straight out of Compton man, another American story, believing that I can,” said Garber.

Garber is reciting a poem he wrote for 49ers Cornerback Richard Sherman whose foundation donated nearly $7,500 last fall to eliminate student lunch debt at the school.

“They have a clean slate and so they can focus and concentrate on being students, and coming to school and giving it their all, just like Richard does on the football field,” said Garber.

Back in San Jose, both students and staff at San Antonio now have even more to root for after their special day with the Niners.

“It’s more than just sports. It’s about, hey, this is a team effort, this is a community effort, and not only do we see them as role models, they’re here on the ground with us,” said Ivan Montes, Ed.D., San Antonio Elementary Principal.

A community coming together to show their love in more ways than one.