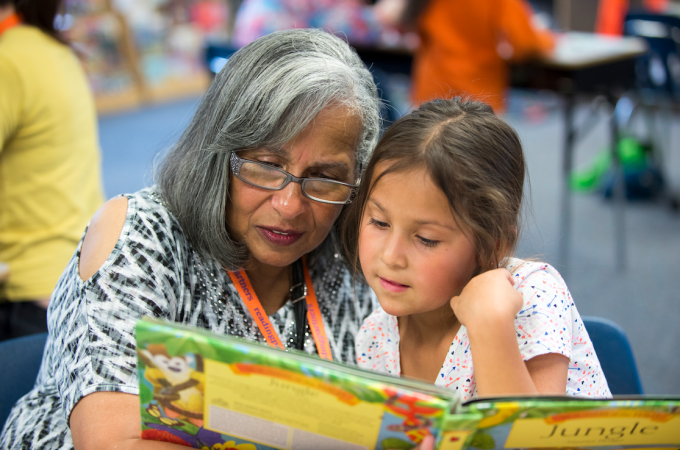 The evaluation focuses on Reading Partners, an almost 20-year-old program that has now spread to 10 states and the District of Columbia

A program that trains community volunteers to provide additional one-on-one literacy support in the early grades is having a positive impact on reading achievement in schools serving low-income students, according to a new five-year study.

Conducted by researchers with Denver-based Augenblick, Palaich and Associates, the evaluation of Reading Partners shows that the almost 700 students who received the twice-weekly, 45-minute tutoring sessions moved from the 15th to the 21st percentile and had significantly higher spring reading scores than the sample of about 850 similar students who did not participate.

The tutoring sessions — which are held during the regular school day — also had an even stronger impact among English language learners (ELL). In fact, ELLs who participated in the program scored higher in the spring than non-ELLs who did not participate. The evaluation was conducted in 22 schools, mostly in the Denver Public Schools. Of the sample, 55% were ELLs, and more than 90% qualified for free or reduced-price lunch, a common measure of poverty.

“In an environment where school districts are searching for programs to help close persistent academic achievement gaps, the study clearly found that the gap between ELL and non-ELL students was actually reversed for students who participated in Reading Partners,” Dale DeCesare, a co-CEO of the consulting company and one of the authors of the evaluation, said in a press release.

The researchers also wanted to examine the effects of the program for students who participated for multiple years, but the sample size was too small. Still, they found a small positive effect on students’ achievement for each additional tutoring session. Most students receive more than 20 sessions per year, with over half of the students in the study sample receiving at least 30.

Founded in 1999 in Menlo Park, California, the program has since spread to 14 regions in 10 states and the District of Columbia, and it is expected to serve more than 11,000 students this school year. About 14,000 volunteers are expected to participate.

Volunteers receive about an hour and a half of training and are given a scripted curriculum to use that involves reading to the child, asking questions to check comprehension, highlighting key vocabulary words, and then listening to the child read. The researchers, in fact, recommended that the strong design of the curriculum might also translate well to a summer program.

In each Reading Partners school, a space — often a classroom, but sometimes “a nook in the library” — is dedicated as a reading center where the tutors meet with students who have been referred by their teachers, Justin Harlan, the executive director for the Tulsa region, said in an interview.

The study’s authors noted that most students have a primary tutor, but that the more sessions they have, the more likely a substitute — or the reading center’s coordinator — will fill in.

“We try our best to keep the tutor consistent,” Harlan said, adding that he does not “undervalue the importance” of the tutor-tutee relationship. “Expecting the same person or people week after week contributes to the successful outcomes that we see.”

The program is currently in 25 Tulsa Public Schools and one charter school, drawing teams of volunteers from local corporations, universities and even the city, where Tulsa Mayor G.T. Bynum encourages city employees to spend one lunch break a week reading to students.

“I think Reading Partners provides the one-on-one love and care every teacher wants to provide their kids,” Harlan said.

The evaluation also emphasizes the role of the school-based center coordinators.

“Specifically, coordinators broker multiple schedules, including that of the tutor, student and the student’s teacher, to meet program goals for number of sessions and strong tutor-student relationships,” the authors wrote, noting that when coordinators had to deal with multiple scheduling changes, students often ended up not receiving their two sessions per week.

In keeping with the study’s findings on frequency, Harlan added that his coordinators focus on making sure all students currently referred to the program are receiving two sessions per week before signing up a student for just one per week. He added that since the program began in Tulsa in 2013, 90% of participants have met their goal, and most exit the program after a year.

Those who continue, he said, are in the gap between being struggling readers but not being identified to receive special education services.

While the study focused specifically on Reading Partners, the findings do have some implications for school leaders who want to implement similar academic support programs for students. For example, having a coordinator to oversee the scheduling and maintain the partnerships with volunteers takes that responsibility off principals or other school administrators.

In fact, the researchers reported that school leaders in Denver said the program “required much less of their time and engagement to implement successfully than similar supplemental programs for students.”

Harlan noted that it’s also important for volunteers to have clear directions and to have a structure in which they know where and when to show up. It’s also valuable, he said, for them to see the “real results” of their work. And he stressed using a program with some evidence of its effectiveness.

An earlier 2015 MDRC evaluation of Reading Partners found that students in the program gained about “one and a half to two months in reading proficiency” compared to non-participants, and that the growth was “robust” across students from different subgroups and with varying levels of comprehension skills. The authors also called the program a “low-cost option for underresourced schools.”